Here’s a headline from the Seattle Times that’s sure to get some attention: King County housing-affordability index best in 17 years

Thanks to declining prices and record-low interest rates, houses in King County are more affordable now than they’ve been in at least 17 years, a new score card says.

The county’s “housing affordability index” score, a measure devised by the Washington Center for Real Estate Research at Washington State University, hit a record high of 127 in the third quarter.
…
The median price for the third quarter this year was $350,000, the center’s latest score card says, down 10.3 percent from the same quarter last year.

“You put those three together and you get greater affordability,” he said. 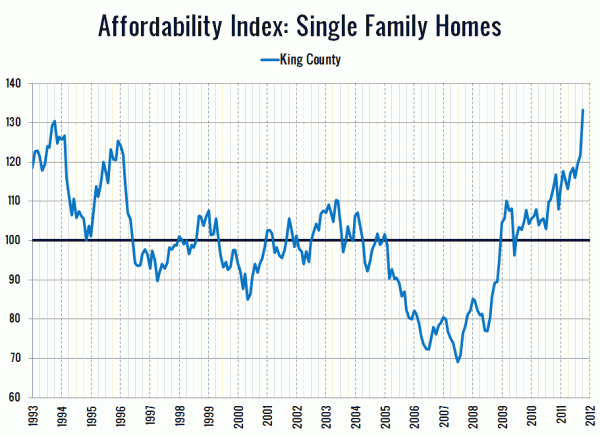 It’s important to note what the Affordability Index is, and what it is not. In short, it’s simply a measure of the monthly expense of buying a median-priced home, relative to the median household income. A high affordability index doesn’t mean that every home is priced fairly, it just means that the monthly payment on homes are highly affordable relative to incomes. If you want the long version, hit this post: What the Heck is the Affordability Index, Anyway?

To get an idea of why the affordability index is at a record high, take a look at this view of two of the three components that go into the calculation: 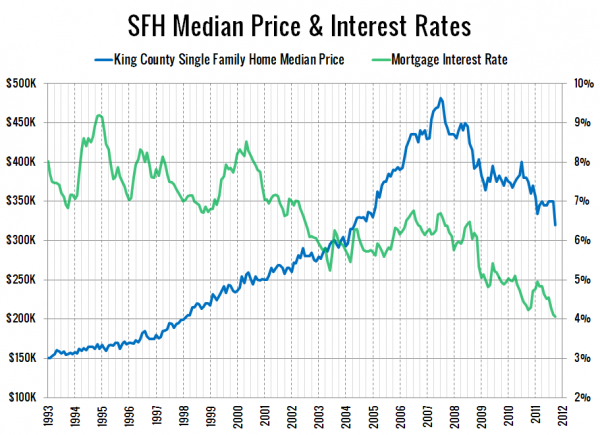 Interest rates are at an all-time low, while home prices are at early 2004 levels. When homes were cheaper pre-2004, interest rates were fifty to one hundred percent higher than they are today.

For those that are interested, I also calculate the affordability index for Snohomish and Pierce Counties, where I only have price data back through 2000: 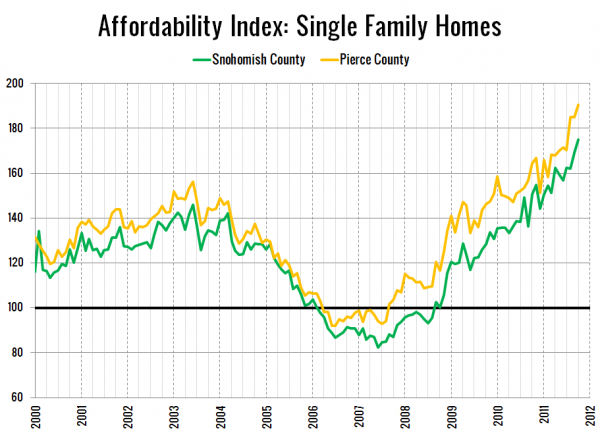 While homes are still quite expensive compared to most of the ’90s, today’s artificially-low interest rates make the payment on those homes more affordable than ever, which is why in the Seattle Times article linked above, I am quoted as saying that “It’s a great time to buy if you want to keep your monthly payments low.”

The qualification “if you want to keep your monthly payments low” is key. If you’re a monthly payment buyer, it is indisputably a better time to buy than it has been since at least 1993. The data doesn’t lie.

Does that mean it’s a great time for everyone to buy a home? Nope. As I pointed out later in the article, the moment you sign the closing documents on a home, you effectively lose ten percent of its value, since that’s about how much it will cost you to sell the home. Since home prices are likely to continue slipping for the next few years or at best remain flat, if you’re not planning on staying put for a good long time, it’s still a better idea to rent, regardless of high affordability.