“As we head toward the end of the year, it’s certainly good to see a healthy number of buyers relative to the available inventory for sale,” said Mike Grady, president and chief operating officer of Coldwell Banker Bain. “In fact,” he noted, “there are some desirable neighborhoods in urban core areas where the case could be made there are too few homes currently for sale.”
…
“Entering the New Year, the Seattle metro area will start off with a shortage of inventory in both the more affordable and mid-priced ranges,” suggested J. Lennox Scott, CEO and chairman of John L. Scott Real Estate. He noted a high percentage of sellers are receiving offers within the first month or two of listing their homes.
…
For homes and condominiums that sold last month, the median selling price was $225,000, down 10 percent from the year-ago median price of $250,000. Single family home prices were off 8 percent from a year ago ($234,612 versus $255,000), while condo prices slipped more than 17 percent ($169,000 versus $204,500).

Brokers point to distressed properties, which tend to be deeply discounted, as a primary cause of lower prices.
… 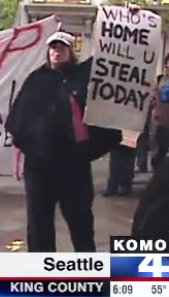 “Home prices continue to get dragged down by foreclosures and short sales, which is disappointing given how strong home sales are,” said OB Jacobi, president of Windermere Real Estate. “We probably won’t see drastic changes in prices until the banks work through the distressed inventory,” he noted, adding, “but we expect the pace of this process to pick up over the next several months, so hopefully by this time next year we’ll be singing a different tune.”

If we just ignore the inevitable fallout of the massive housing bubble (bank-owned homes and short sales), we can almost pretend as if prices aren’t falling!

Not this time. Distressed properties are keeping prices down, Jacobi said, and they are unlikely to increase much soon.

“The worry is, what do the banks have in their shadow inventory” of homes in foreclosure that haven’t been put back on the market for resale, he added.

More foreclosures are on the horizon.

The number of Washington homes whose owners were delinquent on their mortgage payments has increased in the past year, according to the Mortgage Bankers Association.

And, at their current pace, it could take banks nearly four years to work through the current statewide inventory of properties whose owners are at least 90 days delinquent on their mortgages, [WCRER Director Glenn] Crellin added.

This would seem to back up what I’ve been saying about the apparent dramatic drop in foreclosures: it’s just the pipeline clogging up due to legilative meddling in Olympia. If that four years number is accurate, it’s a pretty good bet that we won’t see price increases for at least that long, as well.

“Entering the New Year, the Seattle metro area will start off with a shortage of inventory in both the more affordable and mid-priced ranges,” J. Lennox Scott, CEO and chairman of John L. Scott Real Estate, said in the release.

But Crellin rebuffed talk of a shortage, saying that the listing service’s inventory numbers miss many of the lender-owned homes already on the market. He added, “If the inventory gets much shorter we’ll start to see the lending institutions putting more of their product out there.”

“We probably won’t see drastic changes in prices until the banks work through the distressed inventory,” Jacobi said, adding, “but we expect the pace of this process to pick up over the next several months, so hopefully by this time next year we’ll be singing a different tune.”

Brokers are optimistic about the potential benefit a tentative labor agreement between the Boeing Co. and the Machinists union could have on the real estate market. Union members vote Wednesday on a contract that secures future 737 work in Renton and ensures labor peace until September 2016.

With that news, combined with momentum from other major area employers, “we are seeing solid, renewed demand for local housing,” J. Lennox Scott, chairman and CEO of John L. Scott Real Estate, said in a statement.

If you say it often enough, you can make it true.

Distressed properties are to blame for the falling prices, brokers said, because they sell at a discount.

“Home prices continue to get dragged down by foreclosures and short sales, which is disappointing given how strong home sales are,” said OB Jacobi, president of Windermere Real Estate, in a news release. “We probably won’t see drastic changes in prices until the banks work through the distressed inventory.”

It’s unclear how long that will take, and how far prices will fall until then. The MLS, which represents 21 counties in Western and Central Washington, classifies distressed properties as those that are bank-owned, and its data showed that almost 38 percent of the single-family homes that sold in Pierce County last month were in that category.

You can really tell how much care and effort went into this article.

No story on the NWMLS November numbers in The Olympian this month, but they did post this yesterday:
C.R. Roberts, The Olympian: Negative equity on the rise locally

Eighteen percent of homeowners in Olympia and the Thurston County area owed more on their mortgages than their homes were worth in the third quarter this year, according to the analytic and business-services company CoreLogic.

That compares with 18.2 percent in the previous quarter. Nationwide, 22.1 percent of mortgaged properties were in negative equity.

“I think it’s certainly a trend that’s going in the wrong direction. It’s probably as much a reflection on the overall economy as anything else,” said Mike Larson, owner-broker at Allen Realtors and president of the Tacoma-Pierce County Association of Realtors.

“As long as there’s a reluctance or a hesitation to buy, the values are going to continue to erode. As values erode, the number of people who are upside-down will increase,” Larson said.

If only someone could have foreseen this vicious cycle before prices got so out of control!