I’ve been seeing more and more stories popping up all over various news outlets about high gas prices lately. Most have been about how the issue will effect the November presidential election, but it’s only a matter of time before the conversation moves to real estate again.

Rather than re-writing all of my thoughts on this issue, I thought I’d get out in front of it this time with a wrap-up of the posts I wrote the last time this topic spiked in the collective consciousness back in mid-2008 (whoa, has it really been that long?).

So lets say you decide to move in closer, to Kirkland or Woodinville. Now your commute is just 6 miles, and a week’s worth of commuting costs you just $10, saving you a grand total of $1,900 per year.

From Will High Gas Prices Save Close-in Neighborhoods?

Pretty much any way you slice it, the higher cost of housing close-in far outweighs any financial benefits you get by cutting your commute. Run the numbers for any pair of far-flung vs. close-in cities around Seattle and you’ll find the same thing.
…
What I’m trying to get at here is that the “high cost of gas” argument for why close-in neighborhoods will somehow retain their value just doesn’t wash.

There is value in living close to your job, but with the current dynamics of home prices and gas prices, that value is simply not financial. 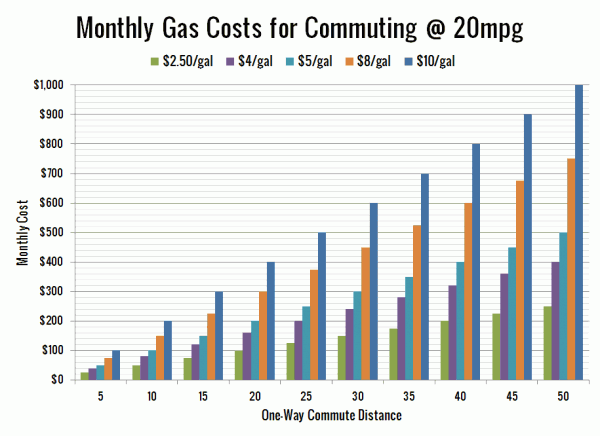 I’m not saying that there aren’t a lot of convincing reasons to want to live “close-in.” I’m also not making some sort of general statement about the overall economics of living further out. Articles such as these are making the claim that gas prices alone will drive people into more expensive in-city real estate. I’m simply saying “prove it.”

True, homes are considerably cheaper today than they were four years ago when we had this discussion last time, but unless you’re commuting daily between Bellingham and Tacoma, the cost of gas (however high it is) is still likely to be dwarfed by the housing costs of moving to a closer-in neighborhood.