I thought it might be interesting to dig into a real life example of just how much money a bubble-believing home buyer would have lost by purchasing a home during the insanity of the housing bubble in Seattle. What better example to use than our favorite Ballard home that just sold? 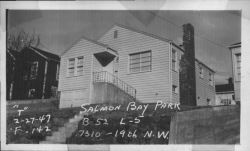 So we’re looking at a grand total monthly payment of $2,819 a month out of the gate.

Let’s figure out the income tax deduction. Let’s assume that our Ballard buddy had $7,000 in other deductable expenses and was in the 28% tax bracket ($139,351 – $212,300 for a married couple as of 2011) To figure out how much they saved, we need to add up their interest paid and other deductable expenses, then subtract each year’s standard deduction (since they would have gotten that deduction even if they were filthy renters), and multiply the total by their tax rate. The table at left shows how this savings breaks down each year.

In February 2008, the two loans were refinanced into a single loan with a new balance of $412,500. Since that sum is $23,383 more than what the balance of the two separate loans would have been by that time, I’ll assume the closing costs (and maybe a vacation?) were simply financed in. With interest rates at the time at 5.92% and the new, increased loan principal slightly offsetting the rate reduction on the piggy-back that was folded in, the monthly payment actually calculate out to be the same: $2,819.

I should also point out that for closing costs on the initial 2005 loans, my conservative estimate is $3,600—Bankrate’s average for a $200k loan in Washington State. They would most likely have been higher than that in reality.

The table at right shows all the costs and gains between April 2005 and February 2012 for owning this Ballard home, excluding maintenance and any possible buyer concessions at sale (e.g. seller-paid closing costs, misc. repairs, etc.), which there’s really no good way to estimate.

Note that even though the home was sold for just shy of its original purchase price ($7,800), the owner did not actually come that close to “break even.” Ignoring all the ongoing costs of ownership and just comparing the starting money (down payment plus closing costs = $30,540) to the ending money (sale proceeds minus loan payoff, agent commissions, and taxes = $481), we get a total loss on this home of $30,059.

But that’s not even the most interesting question to answer… $225,469 over 82 months comes out to a total monthly cost of $2,750. Let’s compare the monthly costs and total 82-month cost of buying this home to the alternative: renting.

Bottom line costs on this “nearly break even” Ballard home between 2005 and 2012:

Dang. That’s a lot of money to burn just for the “pride of ownership.”