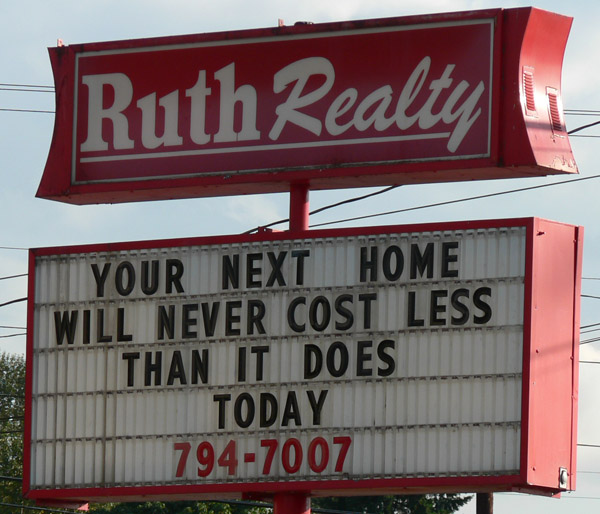 Commenting on recent activity along with expectations of a holiday season slowdown, some brokers noted there are multiple—and sometimes, unrealized—advantages to buying and selling homes as the year winds down. “Waiting will not provide much benefit,” suggested Mike Gain, CEO and president of Berkshire Hathaway HomeServices Northwest Real Estate in Seattle.

MLS director Frank Wilson agreed. He believes it will be more expensive to buy a home during 2014. “Slow but steady price appreciation, upward pressure on interest rates and increased costs of getting a loan will all work to decrease the buyer’s purchasing power,” said Wilson, the branch managing broker and Kitsap District manager for John L. Scott in Poulsbo.

“Waiting will not provide much benefit.” “It will be more expensive to buy a home [next year].” Gee, where have we heard those claims before? Oh right. Only from basically every real estate agent, all the time. The photo above is one I took of a real estate broker’s street sign in 2006.

The Northwest Multiple Listing Service said Wednesday the median price of a single-family home in King County rose 7.5 percent compared with a year ago. It was the 20th consecutive month of a higher year-over-year median price, but the first time in more than a year that the increase was less than 10 percent.

The drop-off may mean the housing market is moving away from the dreaded boom-and-bust cycles that can lead to a market crash, brokers and economists in the region said.

November brought a solid sign that the recent home sales surge is at least leveling off, with King County’s first year-to-year sales drop in two and a half years. But inventory remains tight.
…
“It’s pretty much a stable market,” said Glenn Crellin, associate director of the Runstad Center for Real Estate Studies at the University of Washington.

Hmm, I’m not sure I’d go so far as to call the current market “stable,” but it’s definitely less insane than it was earlier this year.

The Everett Herald has just stopped reporting on the NWMLS stats in their real estate section, it seems. I’ve reached out to offer them contract writing services. While the Herald apparently doesn’t have a budget for freelancers, the Herald Business Journal does, and my first piece there will be appearing there soon.

The Pierce County housing market still exhibited growth during one of the slower months of the year, with home sales and median prices rising modestly in the year-over-year November period, according to Northwest Multiple Listing Service data released Wednesday.

Not a lot of meat to the online version of the News-Tribune article this month.

Thurston County home sales shot up more than 30 percent in November, a stronger-than-usual showing during a month when sales are typically slow, according to Northwest Multiple Listing Service data released Wednesday.
…
Van Dorm Realty managing broker Jerry Wilkins explained the rise in sales this way: Consumer confidence continues to improve, and buyers have been in act-now mode because they are anxious about another rise in mortgage interest rates.

Now that is interesting. Sales fell year-over-year for the first time in quite a while in King County, but were up over 30 percent in Thurston? I’ll be looking into that later this month for sure.