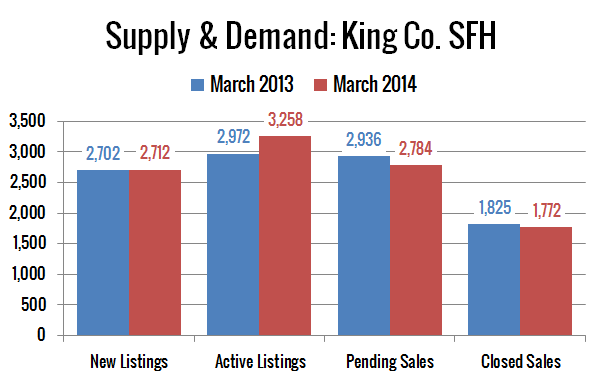 Well, obviously I failed at making time to get this done on Friday, but that doesn’t mean we’re going to skip our monthly reporting roundup, where you can read my wry commentary about the news instead of subjecting yourself to boring rehashes of the NWMLS press release (or in addition to, if that’s what floats your boat).

Lack of inventory is holding back sales

Northwest Multiple Listing Service brokers reported rising prices on fewer sales during March compared to a year ago, citing inventory shortages as the main reason.
…
“The only thing holding back sales is the lack of inventory,” said John Deely, a member of the Northwest MLS board of directors. He said one recent listing priced at a fair market value drew more than 40 offers. “The depth of buyer demand appears to have no bottom in the most popular price ranges,” added Deely, the principal managing broker at Coldwell Banker Bain in Seattle.

Here’s the thing. For the claim that “the only thing holding back sales is the lack of inventory” to hold any water in an environment where sales are on the decline from this same time last year, inventory would need to be flat or down from last year. In fact the opposite is true:

So there’s obviously something else that’s driving down sales beyond just a lack of inventory. I think it’s mostly due to interest rates. Many buyers who might have otherwise waited until this year to buy jumped in last year when rates were crazy low. Since rates are now on the rise, sales are starting to suffer.

A continuing tight inventory of homes for sale kept pressure on prices.

“Everyone’s waiting for the spring bounce in listings,” said Seattle economist Matthew Gardner. “We’re all hoping that’ll be the case. Without a doubt there are still more buyers than sellers.”

Still, annual price growth has been slowing: In January the median price in King County was 17 percent higher over the previous 12 months; in February, 11 percent higher.

The number of active listings every month has been higher than a year ago, but the number of pending deals — mutually accepted contracts to buy a home that haven’t closed yet — is lower than last year in all three counties, suggesting buyers are being more choosy.

As usual, a good article from Sanjay Bhatt, digging deeper than the shallow sales pitches in the NWMLS press release.

So much for improving home inventory.

Hmm. Technically true, but misleading. Months of supply always drops over the first few months of the year. Overall, inventory is (very slowly) climbing and sales are falling compared to a year ago, which removes seasonal factors.

Another month, another drop in home sales.

Pending sales for homes and condominiums in Snohomish County dropped in March from the same period a year ago, according to according to numbers released Thursday by the Northwest Multiple Listing Service.

Hey, look, the Herald is back in the monthly reporting game. Welcome, Jim Davis!

Looks like we just get the short blurb version of the News Tribune’s story online this month.

The Thurston County housing market delivered a mixed bag of results for March, with sales heading in one direction, while prices went the other way, according to Northwest Multiple Listing Service data released Thursday.

Although more homes sold in March than February, last month’s sales still fell 6.8 percent from the year-ago period, falling to 246 units from 264 units in March 2013, the combined single-family residence and condo data show.

Not much of a meaty story online in the Olympian, either.