Much has been made of Seattle’s continued resilience in the face of the national downturn in housing prices. However, the bear comeback to this type of cheerleading is the argument that Seattle is simply late to the party and will eventually see declines of its own as well.

In order to test how well the “late to the party” hypothesis holds up, let’s do a little comparison shopping using the latest data from the S&P/Case-Shiller Home Price Index (March 2007). 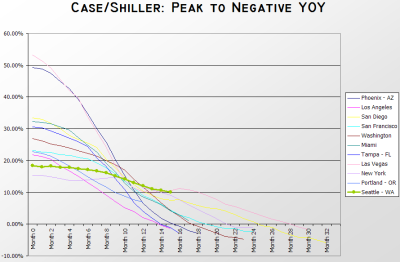 I have highlighted Seattle’s data with the thick green line. As you can see from this graph, Seattle is actually following right along the middle of the road since its peak YOY appreciation, when compared to other cities that experienced a similar real estate boom. Here’s a summary of how long each city took to go from maximum YOY to YOY negative:

In my opinion, the writing is on the wall.

For even more brainy number-crunching of the Case-Shiller data, check out Deejayoh’s analysis in the forum. Great work!