It’s getting more and more difficult for the local press to pretend like everything is roses, bubbles, and white puffy clouds in the local housing market. So, what’s the next best thing to pumping housing? Spreading fear about renting!

Renters have been saying loudly that rents are rising steeply and vacancies are few.

Average rents in the region jumped almost 2 percent between the first and second quarters of this year and are now 9.1 percent higher than this time last year, reports apartment analyst Tom Cain, of Cain Inc. He surveys 149,000 King and Snohomish county apartments quarterly.

Meanwhile, the vacancy rate continues to drop, now at 4.24 percent for the two counties. Anything under 5 percent is considered tight.

“The rental market will continue to tighten as a result of job growth, in-migration and a combination of an insufficient amount of new construction to fill demand and apartments leaving the rental pool for conversion to condominiums,” says Cain, publisher of Apartment Insights Washington.

Obviously it would be stupid of me to try to argue that rents have not increased. I will however point out that while the article seems to imply that 9% per year increases are somehow indicative of a new trend, and likely to continue consistently for years, this is likely not the case. Rents are directly tied to wages. You can’t go out and get a 0%-down, I/O-ARM to finance your rent.

Rents are experiencing a temporary spike due to the extended period of stability and even decreases during and after Seattle’s post-dot-com economic downturn. Unless wages have been and continue to increase at 9% per year, rents will most likely jump a bit, then increases will fall in line with incomes.

To support this premise, I pull this statistical standby out of the vault: 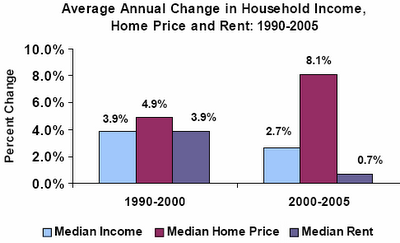 Notice how from 1990 to 2000, rents and incomes tracked (on average) perfectly? Also notice that from 2000 to 2005, rents lagged a bit behind incomes. Incomes experienced 5 years of 2.7% annual increases (average), for a total increase of approximately 14.2%. Rents’ total increase was 3.5%. Assuming that income increases hold mostly steady, it will take just two years of 8% rent increases for rents to catch up to incomes.

Put another way, eight quarters of 2% rent increases would bring rents back in line with incomes. Since early 2006, rents have been rising fairly steadily at roughly 2% per quarter. That’s six quarters, out of the eight required for rents to catch up. Remember, rents are not dictated by what landlords wish they could charge, they’re dictated by what the market can bear, i.e. – what people can afford to pay based on their income.

In all likelihood, rent increases will have tapered off significantly by this time next year. But don’t expect to read an article that comes to that conclusion in the Times any time soon.