A reader going by the name Angie has been making some comments on a couple of posts the last few days that merit further discussion:

…the fact is that in some places in the US all but the very rich have been priced out forever! NYC, coastal southern California, San Francisco, etc, etc. It’s been that way for a long time…but it wasn’t always that way. At some point whatever factors converge, demand forever exceeds supply, and the rest is history.

We’re landlocked like SF and the weather is arguably better. The local economy has diversified enough to keep the town afloat consistently. I’ve long thought that the prices here are headed into San Francisco territory–out of reach of the average Jane and Joe once and for all. Priced out forever!

“Serious limited supply” is exactly what I’m talking about. Unless we get housing density like New York City, there is no way the city of Seattle is going to be able to house all the people who are projected to come here in the next 10 years. Supply is always going to be less than demand.

Angie touches on a number of points that have been discussed here before. The crux of the argument Angie is presenting seems to be that housing supply is not keeping up with demand, and as a result Seattle has crossed a threshold of affordability, reaching a sort of permanently high price plateau. (Angie, if I have mischaracterized your argument, please correct me.)

I have a few problems with Angie’s hypothesis (most of which are covered in the posts linked by Matthew in reply to Angie). 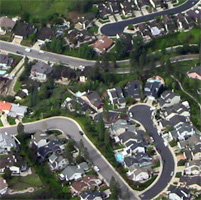 First, I don’t think you can reasonably argue that “supply not keeping up with demand will keep prices rising” while simultaneously ignoring the fact that during the years of highest appreciation, supply exceeded demand. In fact, from 2000 to 2005, an average of approximately 841 housing units were constructed in King County every month. During that same time frame, only 339 new households (net) moved to King County. The increase in supply exceeded the increase in demand (which by the way, was not driven by job growth) by more than double, Seattle was in the midst of the dot-com/9-11 economic fallout, and yet prices increased by a healthy 7% per year (average).

The only explanation for that is easy lending + speculation. If prices were inflated by psychological factors, why would (presumed) economic factors keep them at an already artificially high level? Who is to say that the next 10-20 years of actual “positive fundamentals” hasn’t already been factored into today’s prices, giving them plenty of space to fall back down to earth?

My second issue with Angie’s tale is the assumption that supply will not be able to keep up with demand in the near future (10 years). Consider the 6,000 to 10,000 new condos that will hit downtown by 2010. Drive just a few minutes out of Seattle proper, and consider the dozens and dozens of cookie-cutter housing developments in progress scattered throughout south Snohomish County and east King County. Are there really going to be that many people moving here? Show me the data, because as I showed above, the only hard data I can find shows that construction is exceeding population growth by a good margin. Construction in the Puget Sound seems to actually be accelerating, not tapering off.

Another problem is that Angie’s comments seem to be referring solely to Seattle proper. While the city itself may be somewhat “landlocked,” King, Pierce, and Snohomish counties are fairly well-connected to each other, geographically speaking. Furthermore, outside of Seattle and Bellevue (but still inside the Urban Growth Boundaries) the counties are nowhere near capacity as far as single-family home development goes. Look out your window the next time you fly out of Seatac, and compare the density below to what you see as you fly over the north-east coast, or the south SF Bay Area. There’s simply no comparison.

In my opinion, the easiest way to see that things are seriously out of whack is to look at the price to buy compared to the price to rent. In a sustainable market, the price-to-annual-rent ratio for housing is generally 11 or 12 (source). In King County right now it’s around 24.