While I was enjoying a relaxing weekend with my visiting brother-in-law, playing a copious amount of Xbox 360 and Wii games, the local press was going into overdrive with the real estate booster articles. It’s not worth my time or yours to have separate posts for each of them, so here is a link roundup. (Danger: Sarcasm ahead.)

The first three reports in today’s roundup were spawned by an upbeat report on the local condo market that was released by none other than our hero, Glen Crellin. 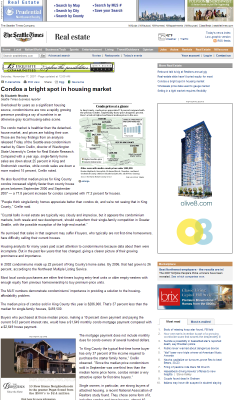 Overlooked for years as a significant housing source, condominiums are now a rapidly growing presence providing a ray of sunshine in an otherwise gray local housing-sales scene.

The condo market is healthier than the detached-house market, and prices are holding their own. Those are the key findings from an analysis released Friday of the Seattle-area condominium market by Glenn Crellin, director of Washington State University’s Center for Real Estate Research.

It was pointed out to me by a reader that the online edition of the Times article was peppered by as many as six ads for local home sellers (I never see ads, thanks to Firefox + Adblock Plus). See a screenshot to the right (click to enlarge). The ads are clearly determined by scanning the text for keywords, but it was still amusing that ads for Prudential Realty, Polygon (houses), John F. Buchan (houses), Olive8 (condos), Brix (condos), Bellevue Towers (condos), The Burnsteads (houses), and ZipRealty were covering the page as people viewed the upbeat report about how great our market really really is. Really.

The Seattle area’s housing market is stronger than the nation’s, and condominiums have held up better than houses. Still, the market is slowing, economists said at a forum Friday.

Thank the economy for the area’s vigor, Glenn Crellin, director of the Washington Center for Real Estate Research at Washington State University, said at the annual forecast breakfast sponsored by Williams Marketing, a Seattle firm that works with housing developers.

Hmm, Williams Marketing… now where have we heard that name before… Oh yeah, only in about every P-I real estate article, that’s where. So, the Washington Center for Real Estate “Research” is teaming up with a condo marketer to tout our area’s great market? How terribly surprising.

Debra Smith, Condo prices in county up 65 percent in 7 years:

Buyers balking at buying a condominium take note: It’s a better investment than people often think, according to a report released Friday.

The price of condos in Snohomish County rose nearly as fast as single-family homes, and in King and Pierce counties, condos performed better, according to the report by director Glenn Crellin of the Washington Center for Real Estate Research at Washington State University.

Psst… here’s an investing secret: Past performance does not guarantee future results. Pass it on.

Lennox Scott has worked through many market cycles in the decades he’s been in real estate and predicted many months ago that the Seattle market would slow.

So he’s not surprised that it has. Nor is he particularly worried about, calling it no more than “an adjustment phase.”
…
Florida’s Palm Beach County, north of Miami, currently has a 50-month supply of homes for sale.

Las Vegas is also in dire straits for sellers with a two-year supply.

Both had market forces Seattle never had: runaway homebuilding plus thousands of investors who flooded those markets hoping to get rich quick by buying and flipping houses.

Ahh, the old reliable “compared to the absolute worst markets in the country, we’re not half bad” argument. Is it just me, or does it seem like Lennox Scott has turned the volume up a few notches on the “don’t call it a real estate bust” album? He’s being quoted all over the place lately.

Under normal circumstances, Conerly said, first-time buying candidates save for a down payment, work on clearing up their credit and eventually jump into the market. “In 2002, there were cheap mortgages and people were able to buy a year or two ahead of time,” Conerly said. “We weren’t creating additional demand, we were just borrowing from the future.”

Speculators were increasingly investing in houses, with many people entering the market to quickly resell the house for more money, a technique called flipping.
…
After overbuilding in 2003 and 2004, building eased up. In 2005, the number of new homes dropped to about 58 for every 100 new people, which is a number pretty close to normal demand. Last year and this year, the number has dropped even further, to about 42 per 100, which is well below normal demand, Conerly said.

Nationally, there are about 1.5 million houses too many, Conerly said, adding he doesn’t expect a turnaround in the national housing market until 2009. “We’re not working off the overhang very fast,” he said.

But he said things are different here, mostly because we’ve been under-building relative to our population growth for two years.

“We’ve not fully worked off the number of houses we built, but we will work it off faster than the national average,” Conerly said. “This area is going to have continued growth for quite some time.”

This article has the least amount of cheerleading of the bunch, and at least offers some actual statistics and doesn’t just parrot the usual real estate mantras. However, we’re still being fed the “better than the national average” and “continued growth” type of lines, apparently intended to ease any fears that we will experience a downturn at all. Given the figures they gave about the rate of building 2003-2007, and assuming that the present rate of building and population growth keeps up (a big assumption), we’re still looking at 3-years’ worth of new construction oversupply. But don’t worry, we’ll work it off “faster than the national average,” so everything will be okay.