The October data from from Case-Shiller has been released, showing that Seattle remained one of only three markets to have positive year over year returns (in addition to Portland and Charlotte), while posting it’s third straight month of declining real estate values:

We now have seen a full quarter of declines which has scrubbed 1.27% off the index. This is a fairly small decline, but to put it in perspective it is a bigger three month loss than any period since October-December 1991 – when the index declined 1.94% as part of a six month slump. With the NWMLS numbers already in for November (-0.5% for the year), it seems unlikely we have reached the end of the trend at this point.

Frankly, the C-S data comes out so far in arrears that I can’t see how it is news to anyone at this point that the downward trend in home prices is continuing. What is interesting to me is that the trend is clearly universal at this point. Month over month changes were negative for every city tracked by the index, for the second straight month.

More worrisome is that both the 10 and 20 city indexes show that the downward trend appears to still be accelerating. This can be seen in this chart, lifted from the Standard & Poors press release: 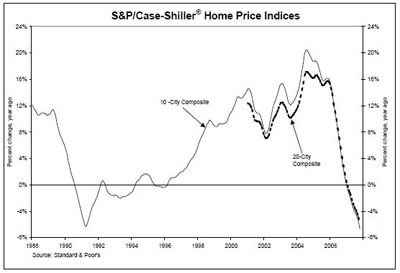 I am skipping Tim’s usual graph (with L.A. & San Diego offset from Seattle & Portland by 17 months) because I can’t figure out how to show two horizontal axes, but here’s an update of the other graph with all 20 Case-Shiller-tracked cities, with no time-shifting. 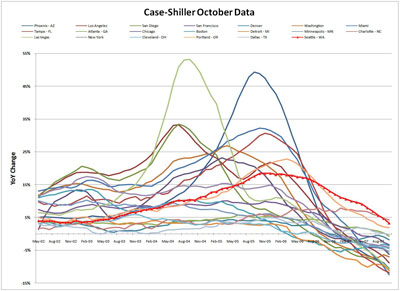