In my perusals of real-estate blogs this morning, I ran across a link to Housing Predictor, a site which has recently published a forecast for the top and worst performing housing markets in 2008. Housing Predictor describes their business as follows:

We examine more than 20 micro market characteristics in each market place, including income levels, employment trends and changes, school enrollment, business trends, regional political influences, real estate sales history and current housing market velocity. The factors are all considered to come up with each local market forecast.
All of the information is gathered from hundreds of independent sources the staff develops without bias for the real estate industry to issue the forecasts.
Today Housing Predictor is consulted by the nation’s foremost investment houses, mortgage companies, real estate companies and most importantly consumers for our forecasts. Housing Predictor maintains more than an 85% accuracy rating with its forecasts.

Here is how they show Portland and Seattle in their forecast.

Given what I have seen in the performance of the Case-Shiller indices for the two cities – I found the prediction of a 12.6% spread in appreciation rates to be, well – interesting. 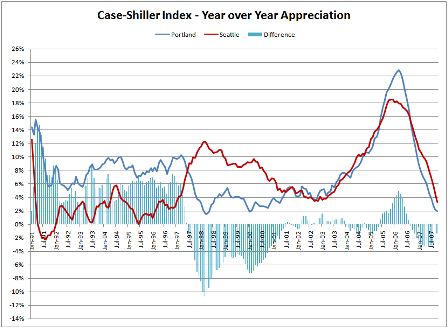 Prior to 2001, year over year appreciation rates in Seattle and Portland seemed to oscillate on different frequencies – but since then have tracked each other very closely. The spread in appreciation between Portland and Seattle has not been that great since 1991. I guess anything could happen – but I suspect the returns in at least one of these markets are going to challenge their claim of 85% accuracy. Perhaps it will be worthwhile to delve more deeply into similarities and differences between these two markets in a later post.

Note that this piece has now been the subject of a cheap-shot post by our good friend Ardell over at Rain City Guide – who referenced it in her post entitled “Seattle Bubble Says Seattle Markets Going UP!“.

Most of you, I hope – caught the sarcastic references to the source – for those how didn’t (e.g., Ardell), you might want to read this article