In order to bring an even more complete picture of the Seattle-area foreclosure situation, I spent some time with Snohomish and Pierce County records, and pulled data on the number of Notices of Trustee Sale going back to 2000 for each county.

Here are charts of King, Pierce, and Snohomish County foreclosures from January 2000 through September 2008, with uniform y-axis scales to provide easier comparison:

Here’s another look at the data, scaled in terms of number of households per foreclosure (based on household data from the American Community Survey, assuming linear household growth between surveys): 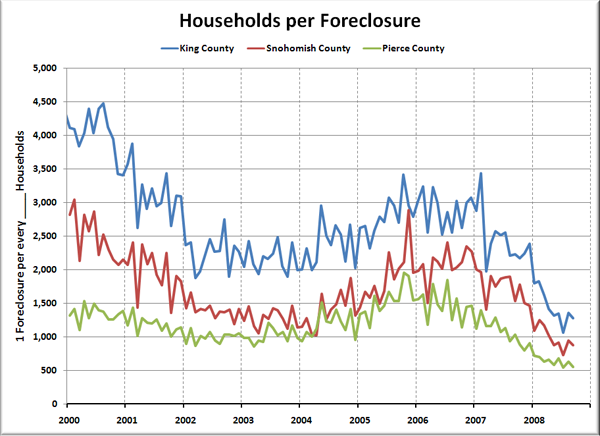 One more take on the data, the following chart simply indexes the number of Notices of Trustee Sale to 100 in January 2000 for each of the three counties, to give a directly comparable perspective of the rate of change between King County, Snohomish County, and Pierce County: 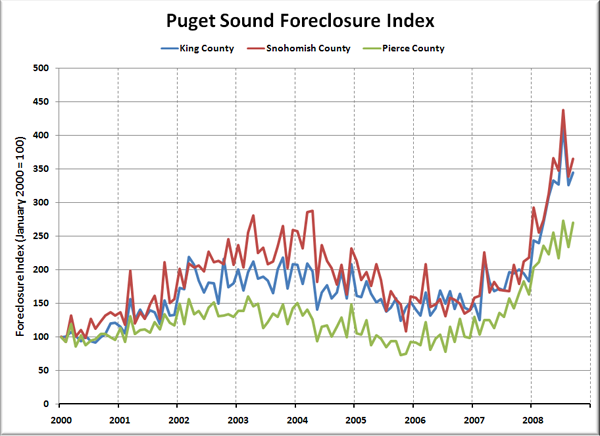 If you’re interested in an even more granular breakdown of the most recent data, check out the foreclosure heat map at Hotpads.com, which color-codes each zip code based on households per foreclosure.