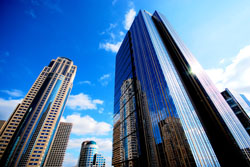 According to today’s Seattle Times, JPMorgan Chase plans to cut around 70% of WaMu’s Seattle-area employees.

JPMorgan is handing out layoff notices now and is expected to finish making decisions about all of WaMu’s 43,200 employees nationwide by Dec. 1.

As many as 3,000 of WaMu’s 4,200 workers in Seattle could lose their jobs, according to current and recently departed WaMu executives who spoke on condition of anonymity.

The layoffs will leave gaping holes in downtown Seattle’s commercial real-estate market, where WaMu occupies more office space than any other company.

With no other major banks headquartered here in Seattle, I wonder where all these newly jobless banking professionals will be able to find work.

I’d like to extend my condolences to those that are affected by these cuts, which are likely to include some of my friends. Sure, we were right about the housing bubble, but nobody likes to see people lose their jobs.

Best of luck to the soon to be former WaMulians.