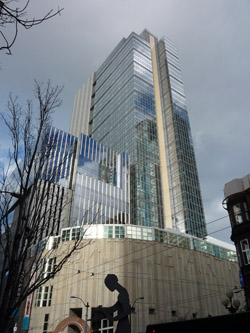 Photo by The Tim

The official layoff count for WaMu was made public today. According to various news sources, JPMorgan Chase will be cutting 3,400 jobs in Seattle.

JPMorgan Chase is laying off 3,400 Washington Mutual employees in Seattle, according to spokesman Tom Kelly. That’s more than 80 percent of the 4,300 people it employs in the city.

Most branch workers will keep their jobs, however.

WaMu’s former headquarters city is taking the brunt of the 9,200 WaMu layoffs that JPMorgan is making nationwide.

This is even more than the estimates we heard just a few weeks ago, when anonymous WaMu executives were cited in a Times report that said “as many as 3,000 of WaMu’s 4,200 workers in Seattle could lose their jobs.”

Fortunately it sounds like those that are losing their jobs are at least being given pretty nice severance packages, and many will have lots of time to find new jobs. It still hurts to lose a job though, and I sincerely hope that those affected by the massive bank failure are able to keep on their feet through these difficult economic times.