Organizations like the National Ass. of Realtors and the National Ass. of Home Builders have been throwing around estimates of how many sales have been “stimulated” by the $8,000 tax credit nationwide, and a recent editorial by Washington State Treasurer James McIntire in favor of the inefficient, expensive, and economically stupid program throws out a number of 7,000 “stimulated” sales statewide.

How many sales locally have been “stimulated” by this ridiculous giveaway of tens of billions of dollars we don’t even have? Let’s try to see if we can estimate the number of stimulated single-family house sales for King County, using some trend analysis of closed sales data from 2000 through 2008. 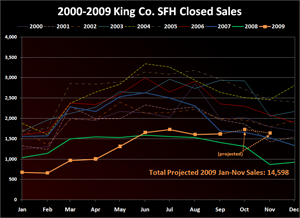 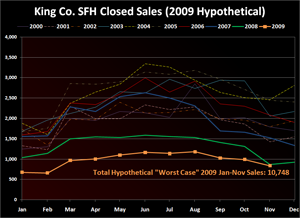 At left above is a chart that includes total closed sales each month from 2000 through 2009, with October and November data this year projected based on the May – September performance. At right above is a chart of a hypothetical “worst case” scenario of sales volume we may have seen without the influence of the $8,000 tax credit, generated by taking the average month-to-month change for each month in 2000-2008, and applying that from month to month in 2009, moving forward from the number of actual sales in April. 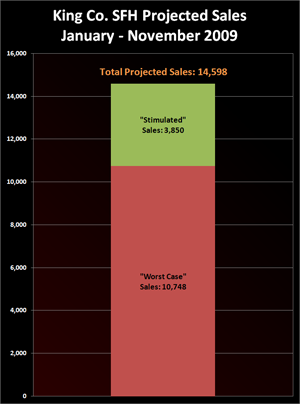 The “worst case” estimate at right above most likely understates the number of sales that would have taken place without the tax credit, since decreasing prices were already beginning to stimulate sales anyway, but for the sake of argument, let’s go with this estimate. Using the above estimates, we arrive at a total number of 3,850 tax credit “stimulated” sales of single-family houses in King County.

If we assume that 100% of the stimulated sales and 75% of the “worst case” baseline sales (i.e. – sales that would have happened anyway without the tax credit) were qualified first-time homebuyers, we can calculate that 11,911 sales will qualify this year for the tax credit. That’s a total cost to (future) U.S. taxpayers of over $95 million, for 3,850 “stimulated” SFH sales in King County—$25,000 per sale.

If we assume that the lower number (2,310) is more reflective of reality and that roughly 90% of these sales were not pulled from thin air, but were in fact merely borrowed from 2010, we can calculate the approximate effect of the expiring tax credit on 2010 sales. Based on those assumptions, once the tax credit expires, we can expect sales to come in roughly 125 to 200 lower than they otherwise would have each month throughout 2010. 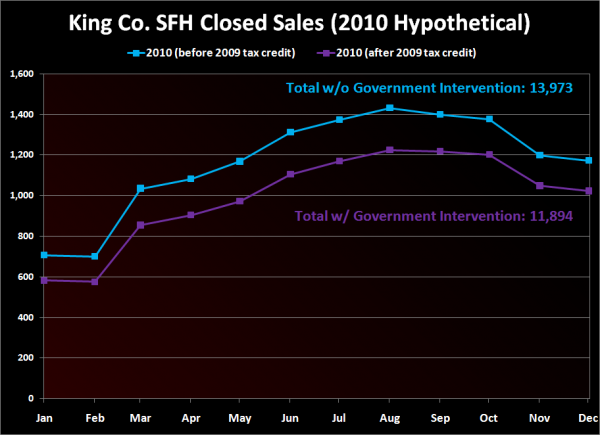 Of course, that assumes that the tax credit will be allowed to expire, which is looking less and less likely. Not that extending it another six months to a year will somehow prevent the market from having to pay back the borrowed sales eventually (at a greater and greater cost the longer it is deferred), but why should pesky little economic realities prevent Congress from spending billions of additional dollars that we don’t have?