There’s no doubt that the gloomy, dark, wet weather has returned to Seattle. While everyone around Seattle retreats into the warm confines of their living rooms and local coffee shops, I’d like to offer a bit of contrarian advice for the house-shoppers out there. Seize the winter.

Winter is hands down the best time to go house hunting in Seattle, for three major reasons.

If home sales were spread evenly throughout the year, each month would see roughly 8.3% of the yearly total. Of course, anyone who has spent even a little bit of time following the real estate market knows that this is not the case. Over the last nine years, four months have consistently accounted for less than their fair share of closed sales each year: November, December, January, and February. 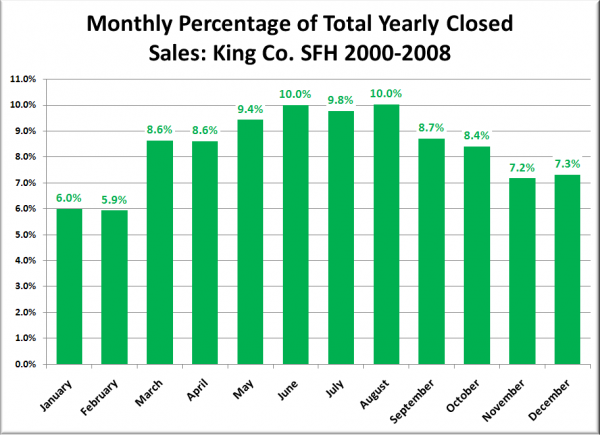 Keep in mind that we’re talking about closed sales, so these represent people who were house-hunting roughly a month or so earlier. In other words, if you want the least amount of competition, you should be out there looking for your next home in December or January. October and November are also good, though not quite to the same degree.

It is true that inventory also tends to decline in the winter months, giving you less selection to choose from, but sales usually decline more, as winter almost always sees the yearly highs for “months of supply” (inventory divided by sales). And less inventory isn’t necessarily a bad thing anyway, as that leads us to the second point…

How many times have you heard a hopeful seller declare as winter approaches: “I’ll just pull my house off the market for the winter and try again in the spring.” These are the kinds of houses you don’t want to buy, because the sellers are obviously not very motivated.

Typically, sellers who leave their homes on the market through the long, dark winter are those that need to sell for some reason or another, and will therefore be more likely to be willing to bargain with you.

Look for homes that have been on the market for 4-5 months in the middle of December, and you’ll probably find a highly motivated seller.

In the summer, Seattle homes look great with a fresh coat of paint, the blue sky in the background providing a delightful contrast to the gleaming reflection of the sun on the bright white trim. But what you don’t see is the host of problems that may be lurking under the surface, ready to spring out the first time the rains return.

When it’s wet and rainy outside, it is far easier to spot lots of common Seattle-area house problems:

Buying a house is a major financial commitment beyond the mortgage, and it’s best to go into it knowing about these kinds of issues before they rear their ugly heads. House shopping in the pouring rain is a great way to help make sure you don’t miss something.

Seize the winter.
Obviously if everyone took this advice, some of the benefits of house-hunting in the winter would be lost. Fortunately for you, most people will continue to let things like school schedules and sunny skies dictate their house shopping plans, making the winter the perfect time for you to get the best house for the least amount of money.