First, here’s a post I wrote back in June on the subject of interest rates and home prices: The Consequences of a Market Full of Monthly Payment Buyers. [Update: Here’s another relevant one that I had forgotten: Interest Rates vs. Home Prices] I’d also like to point out another more recent post that argues that It’s a Great Time to Rent.

Also, please be aware that feeling “pressure” is never a good reason to buy a home. Never.

Okay, let’s tackle the specific questions quoted above. In order to attempt to explore this issue, we’ll look at King County home prices (inflation-adjusted using the CPI) and mortgage interest rates over the last 60 years. 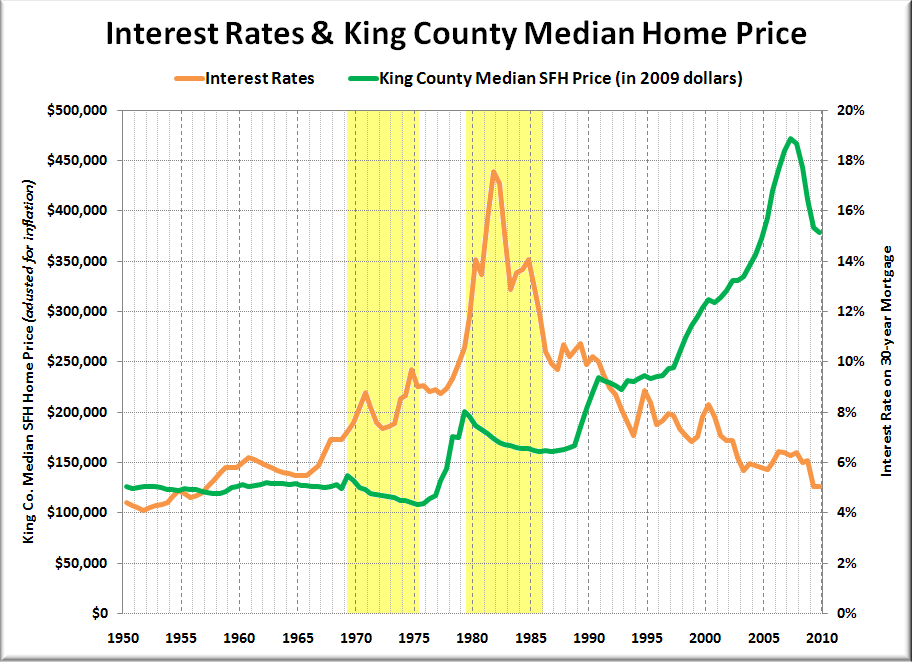 Prior to 2007, there were two extended periods of time during which inflation-adjusted King County home prices fell: 1969-1975 and 1979-1985 (each highlighted above in yellow). Interestingly, mortgage interest rates were indeed rising going into both of those periods.

It is interesting to note that the dramatic price declines that we are currently seeing is the first time that home prices have fallen for an extended period of time without a corresponding period of rising interest rates.

The national picture looks similar, although the 1969-1975 decline is much less pronounced, and there is an additional period of declining prices between 1990 and 1996, during which interest rates were declining. 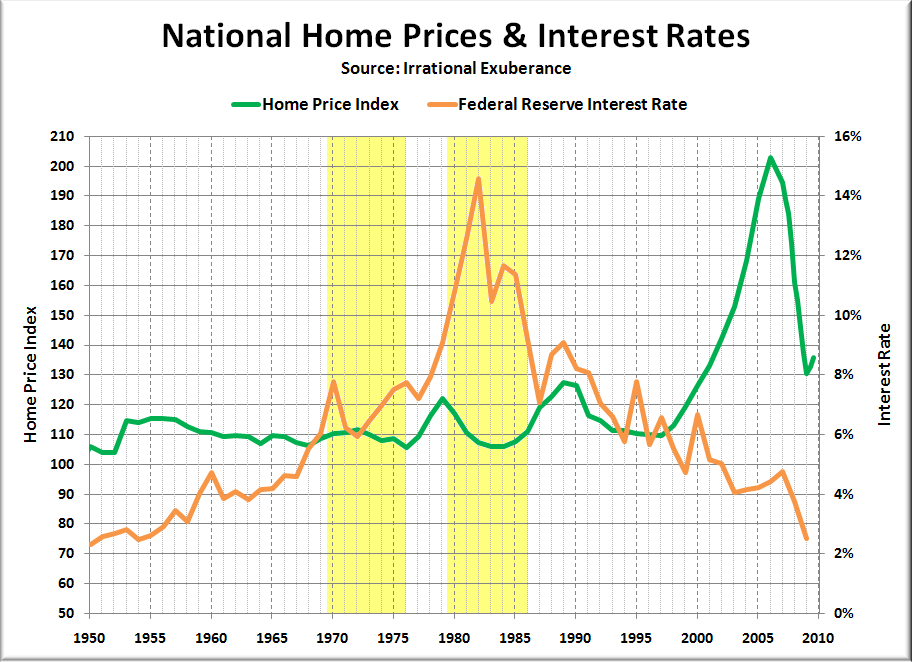 (Note that the interest rate on the above chart does not exactly match the first chart, as the above chart is taken directly from the data provided by Robert Shiller on his Irrational Exuberance website.)

All that being said, it is important to be aware of a couple of things. One, people have been expecting interest rates to rise for about a year, and yet they continue to hover around 5%. Buying based on where you think interest rates are going to go is probably not a good plan.

Lastly, I’ll take this opportunity to repeat the advice I have given since launching this site about when it is best to buy a home. If you find a house that you believe is priced fairly, that you can afford using a conventional fixed-rate mortgage, that you will be happy living in for at least ten years, and you won’t be distraught if the value goes down, then go for it.

Frankly, who cares about interest rate or home price trends if it is important to you to buy a home and you can afford to buy a home you love? Just don’t allow yourself to be fooled into believing that buying a home is a great investment, or that you have to buy now or risk being priced out forever.