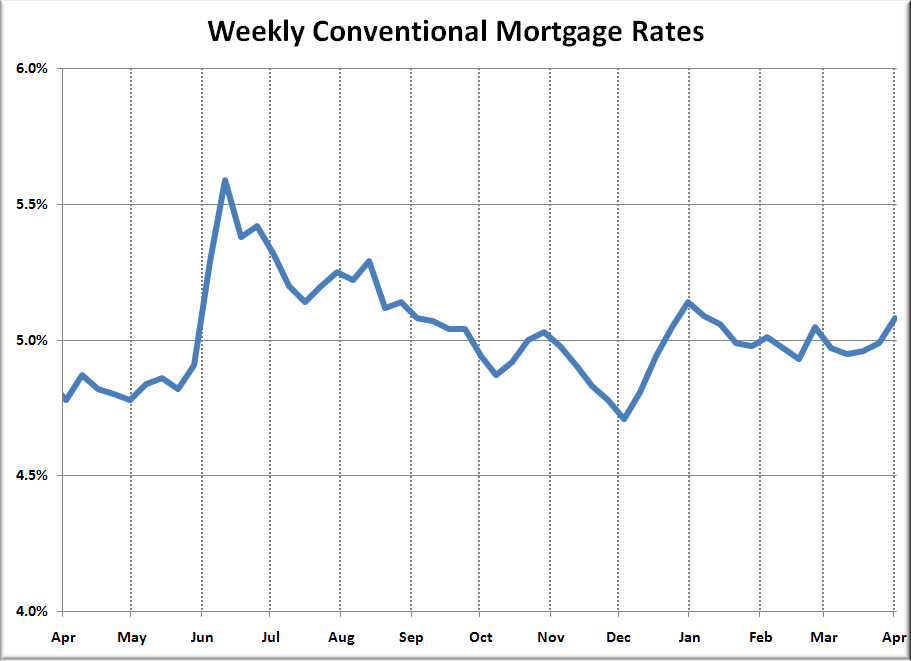 Yesterday the Seattle Times ran a syndicated Associated Press piece* that came across to me as especially over-the-top: Homebuyers scramble as mortgage rates jump (emphasis added):

The era of record-low mortgage rates is over.

The average rate on a 30-year loan has jumped from about 5 percent to more than 5.3 percent in just the past week. As mortgages get more expensive, more would-be homeowners are priced out of the market — a threat to the fragile recovery in the housing market.
…
“We are seeing some panic among potential buyers who have not found houses yet,” said Craig Strent, co-founder of Apex Home Loans in Bethesda, Md. “They’re saying: Man, I should have found a house three weeks ago or last month when rates are lower.”

It’s all about affordability. For every 1 percentage point rise in rates, 300,000 to 400,000 would-be buyers are priced out of the market in a given year, according to the National Association of Realtors.

The rule of thumb is that every 1 percentage point increase in mortgage rates reduces a buyer’s purchasing power by about 10 percent.

Here’s a recreation of their included chart, using interest rate data from the Federal Reserve: 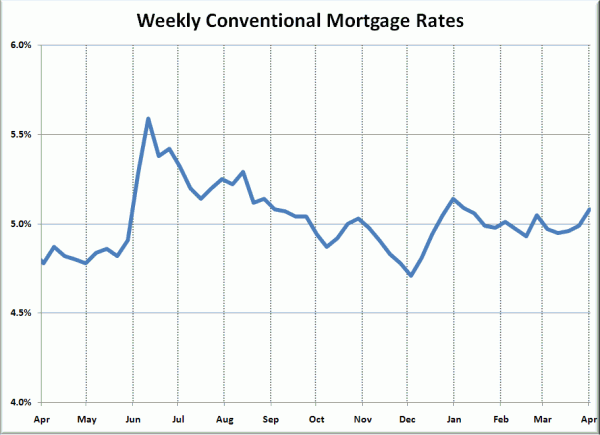 Note that their chart includes only the last year. What does it look like if we zoom out a bit, say to the beginning of 2000? 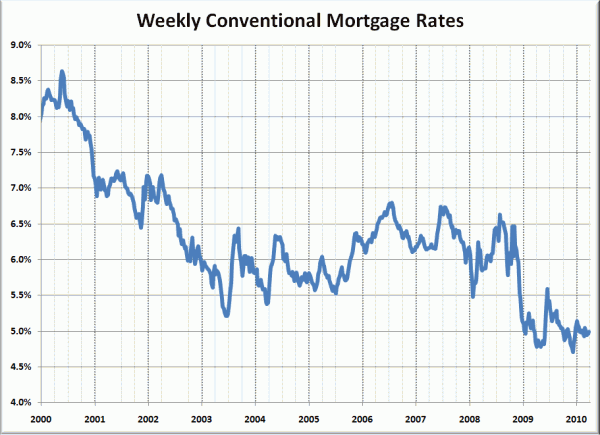 Suddenly that uptick at the end of the chart doesn’t look so scary. “Oh no, interest rates are skyrocketing… to a level still well below where they were for most of the last decade! What ever will we do?” Give me a break.

How about a 20-year view of rates, just for fun? 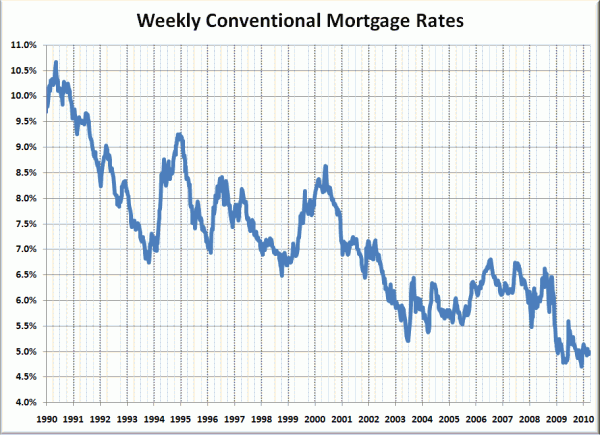 Rates could shoot up a full point-and-a-half, and still be in the range that they were during the housing bubble when we were all subjected to an endless barrage of mortgage finance ads extolling the “historically low interest rates.” So why exactly should we be terrified and jump-into-the-housing-market-right-now-quick-before-it’s-too-late?

The AP’s rationale seems to be that because a rise in rates will reduce buyers’ purchasing power, it will therefore result in a big dip in demand.

In a normal market, with home prices steadily rising, a jump in rates doesn’t cause a big dip in demand. That’s because people know their homes will eventually rise in value and they’re willing to accept a higher mortgage payment.

But now home prices are flat nationally and still falling in some places. Potential buyers are nervous about jumping in.

“In this environment, any rise in mortgage rates does significant damage because people don’t think they’re going to get their money back” if prices fall, said Mark Zandi, chief economist at Moody’s Analytics.

Of course, what they seem to be ignoring (intentionally or not) is the flip side of the equation… If buyers have less purchasing power, won’t that just put more pressure on home prices to keep coming down to a point where the qualified buyers can afford them?

Nah, that would never happen.

* (The link has been updated to the Spokesman-Review website since the original Seattle Times link is now dead.)