I came across an interesting home price forecast for the next two years from Goldman Sachs (via Zero Hedge):

Following their earlier collapse, house prices appear caught in a cross current. On the one hand, there are indications that prices may have bottomed. While alternative house price indices differ in details, they generally show that house prices have stabilized since early 2009 (Exhibit 1). Second, measures of valuation appear to be back in “normal” territory (Exhibit 2). The Case-Shiller price/rent ratio—which stood nearly 25% above its long-run value in early 2006—is now broadly in line with its historical average. Housing affordability—measured as the percent of income spent on mortgage principal and interest—has also improved noticeably during this period. 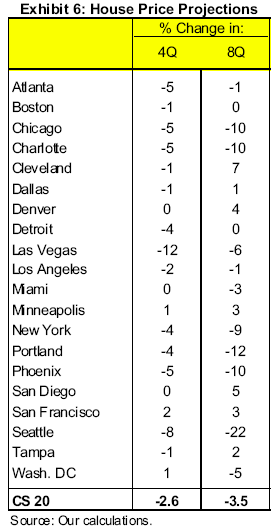 Other indicators, however, point to further house price declines. First, much of the stabilization of house prices since early 2009 appears due to government housing policies, including (1) the homebuyer tax credit, (2) the Fed’s purchase of mortgage-backed securities and (3) temporary mortgage modifications through the Obama administration’s Home Affordable Mortgage Program. We have estimated that these housing policies have temporarily boosted house prices by around 5%.1 Second, the housing market remains plagued by enormous excess supply (Exhibit 3). Despite recent improvements, both the homeowner vacancy rate and the months’ supply of single-family homes for sale remain well above historical levels. Third, the mortgage market remains troubled. Mortgage delinquencies have continued to rise from their already elevated levels (Exhibit 3).

Given these cross currents, how should we expect house prices to develop over the next one or two years? Our working assumption has been for a renewed 5% drop in the national Case-Shiller index between end-2009 and end-2010, and we already saw a 1.3% decline in the first quarter.2 In this comment we present results from a new house price model suggesting that the remaining decline could stretch out over a somewhat longer time period. Specifically, the model points to declines of 3% over the next year and another 1% over the following year as excess supply and rising mortgage delinquencies take their toll.

Here’s a link to the full source pdf (there’s a Chinese cover page but the rest of the document is in the original English).

I definitely find it interesting that Goldman’s home price model has Seattle home prices declining over twice as much in the next two years than any other city except Portland. Here’s what they have to say specifically about their forecast for Seattle:

We predict the largest house price declines for Las Vegas, Seattle and Portland (Exhibit 6). While high home vacancy rates and steeply rising delinquencies are expected to push down prices in all three areas, some interesting differences emerge. Price declines in Las Vegas are projected to be front loaded, as negative price momentum and excess supply lead to near-term price declines, before valuation undershoots sufficiently to push up prices. For Seattle and Portland, the model projects back-loaded price declines as house prices currently look overvalued.

We have discussed the local housing oversupply here at length in the past, and it does appear that homes are still somewhat overvalued compared to the historical fundamentals. I don’t have a PhD in finance, and I haven’t constructed a 6-variable model of home prices, but my estimates have been for only another 10-15% decline in Seattle area home prices, so I was a bit surprised to see such a dramatic call from Goldman.