If you’ve been searching for homes in the Seattle area for longer than about a week, you’ve probably had an experience like this:

After searching your favorite listings website for homes between 1,500 and 2,000 square feet, you find a decent-looking 1,800 square foot home that looks like a good candidate in your price range. You go to see it in person, only to discover that only 900 square feet of the home is actually finished. The other 900 square feet is unfinished basement that was counted in the listing’s total square footage online.

So what’s going on here? In order to figure out the source of this all-too-common square footage confusion, I spoke with an agent with NWMLS membership. He sent the following enlightening bulletin published by the NWMLS to its members in June of 2009:

Can I Count Basement Square Footage in my Listing?

ASF, or approximate square footage, should include finished or unfinished heated living space within the home. This should never include the garage, even if it is in the basement.

Non-contiguous space, such as breeze ways, covered patios or storage sheds should not be included, even if they are covered by a roof. Instead, add verbiage into the “Remarks” section, such as “plus 400 square foot cottage.” Many county assessors have extensive data and information; however, it is best to verify the assessor’s data. 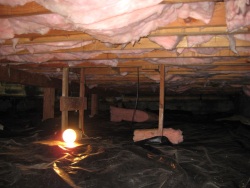 The bulletin included a supplemental document intended to assist agents in determining the square footage of homes they list. It included such interesting tips as measuring the exterior of the home over the siding to determine the total square footage, and to include stairs as “living area.”

I also spoke with a coworker in real estate operations here at Redfin, who explained to me that while the NWMLS listing forms agents use to enter listings into the system include separate fields for finished and unfinished square footage, only the total of the two fields is supplied by the NWMLS in their feeds.

This practice seems to be pretty blatently misleading to me. When I’m shopping for a home, I want to know how much actual finished living area there is. Sure, if there’s an unfinished basement that’s great, but if it’s not currently finished, it’s not really living area, is it?

What advantage could a policy like this possibly give to NWMLS member agents? When you are tricked into looking at a home that is really much smaller than you were led to believe, isn’t your first reaction disappointment and anger? Why would a listing agent want to inspire those feelings in potential buyers when they come to look at a house?