In yesterday’s post I took local real estate agent, appraiser, and real estate educator Richard Hagar to task for some misleading statements he made during a live appearance on KUOW last week. Specifically, I called out his claim that Washington State is currently experiencing net migration of 125,000 people per year.

Mr. Hagar dropped by the comments to defend his statments:

Net drivers licenses are nice since they are reported on a monthly basis and are usually only 60 days behind reality. The bad side is they don’t count the population, only people obtaining drivers licenses (add for kids, subtract for illegals). However, they are good at indicating the direction in growth and over the years have been reasonably accurate.

These three months indicate a growth RATE of approximately 120,000 (ish) for the year. The year to date stats. indicate Washington has grown by approximately 65,544 ending in Sept. That’s a healthy growth. Very similar to growth in the mid 90’s and 2004/2005.

There are a couple of major problems here. One was pointed out by reader NumberMonkey:

Using drivers licenses as a seasonal proxy is pretty awful because registration is highly seasonal. Both immigrants and new driver residents prefer to register in summer. So your growth rate figure is going to be badly overstated in summer because of your poor data selection.

NumberMonkey is right. It makes no sense with a highly seasonal data series such as migration to select the three busiest months of the year and interpolate an annual rate from those numbers. In fact, it’s downright misleading. Unless of course you think it’s valid to claim—based on July-September data—that Seattle’s average high temperature is 72° year-round.

There’s another problem with Richard’s method though. Head over to the Department of Licensing page to grab the driver license data he refers to and you’ll notice the following warning just above the download links:

Note: The calculation of net migration is not recommended due to incomplete or delayed reporting of surrendered license data by other states or countries.

In other words, Richard is doing exactly what the DOL says not to do with their numbers. 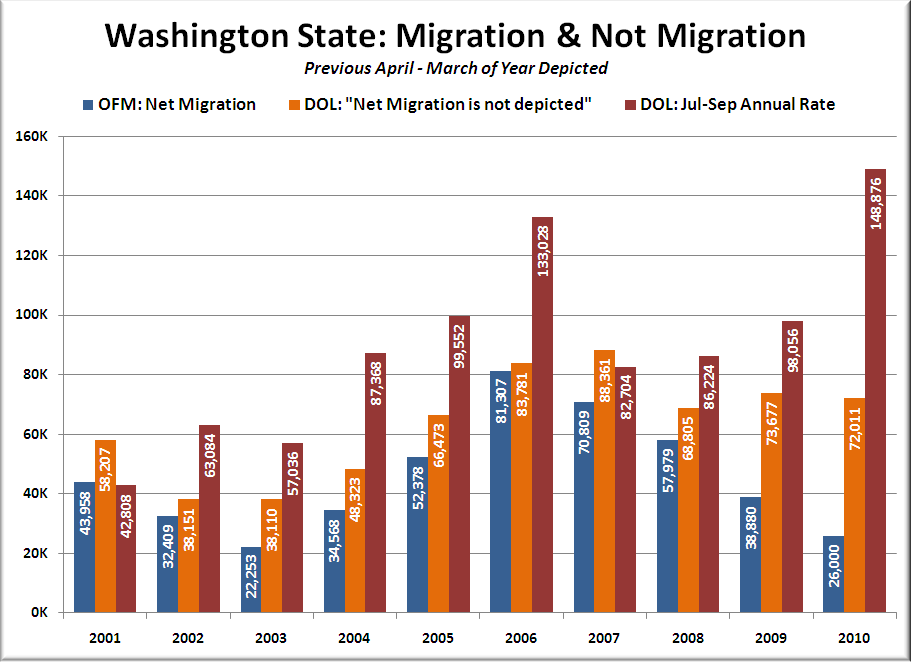 Of course, the fact that he’s applying an invalid method of annualization to a set of data that users are explicitly warned against using in exactly the way he’s using doesn’t matter, according to Richard:

I understand both warnings and of course Summer has higher figures. I’ve been tracking population growth for quite a while. Chart the DOL figures over the past 10 years. Overlay that with Census figures of actual growth. You will note a correlation. It’s not exact and that was not the direction I was going. I think… that while people are trying to nit-pick a figure, they are missing the point… The Seattle area is growing and the figures are looking nice, especially after what was going on last year.

Actually, I’m not seeing much of a correlation at all in the above chart. But that shouldn’t matter, according to Richard. Who cares if the data is way off? You’re missing the point! The point is, a recovery is just around the corner!

Just like how in August 2007, home prices were due to keep going up!

In my opinion, Mr. Hagar should stick to the subject of real estate mortgage and appraisal fraud, and stay out of the market forecast business.