As I was digging through local real estate stories last week, I was lucky enough to catch the following exchange on KUOW’s “Weekday” program last Thursday.

Host Marcie Sillman discusses foreclosures and the Seattle-area housing market with guests Richard Hagar (real estate agent and appraiser) and Linda Taylor (housing director at the Urban League) in Foreclosures, The Housing Market And You.

Here’s an audio excerpt of the really juicy part (about 90 seconds), along with a transcript.

Sillman: Sandra says she would like to have a definition of a restored housing market. “If we don’t want to return to the inflated market, what does recovery mean, when we’re looking at our housing market here [around Seattle]?”

Hagar: Well, if we stay here in the Puget Sound region, which is… yeah—we’re in really good shape. We have a thing called ‘Growth Management’ that limited how we could build houses, where we could build. And so, we don’t have the oversupply like Phoenix has. In addition we have, right now, about a hundred and twenty thousand people a month moving to the state of Washington. That’s net growth. That absorbs a lot of standing inventory.

So what we are seeing is—in fact, we’re already seeing it as we’re doing appraisals—certain neighborhoods have already started a recovery. What that means is that their prices aren’t going down. In fact, we’re starting to see some price increases in some select neighborhoods moving up. So that’s a good news there. We’re still seeing out—areas beyond Marysville, south of Tacoma—their values are still going down, they’re still in a world of hurt, but we’re already seeing some of that turnaround.

Hagar: Yes. It’s going to be a cold winter, there’s no question about it. But when we start seeing interest rates at four percent and less, a hundred and twenty thousand people moving here—our economy’s doing a whole lot better than Vegas, or LA, or others—

Hagar: Spring will be good.

If Richard Hagar, real estate agent and appraiser said it, it must be true, right?

Indeed we do, but that hasn’t stopped new housing supply from outpacing demand across the Puget Sound, even throughout the frenzied bubble years.

And so, we don’t have the oversupply like Phoenix has. …our economy’s doing a whole lot better than Vegas, or LA, or others.

Totally irrelevant when discussing what a real estate recovery will look like here in Seattle.

In addition we have, right now, about a hundred and twenty thousand people a month moving to the state of Washington. That’s net growth. That absorbs a lot of standing inventory.

Wow, that would absorb a lot of inventory… if it were even close to being true. According to the Office of Financial Management’s official population estimates, the state of Washington’s population grew by approximately 65,000 people between April 2009 and April 2010. That’s a whopping 5,400 a month. In other words, Mr. Hagar was off by a factor of twenty-two.

Actually I’m being generous to Mr. Hagar here, because technically he quoted 120,000 a month in net migration, not population growth (babies aren’t exactly capable of buying houses, after all). If you look at OFM’s migration numbers, we’re not even looking at 65,000 a year. We’re growing at a rate of just 26,000 a year, or 2,150 people a month—55 times smaller than what Mr. Hagar claimed on-air.

Here’s what the last 10 years of statewide growth in housing and migration looks like: 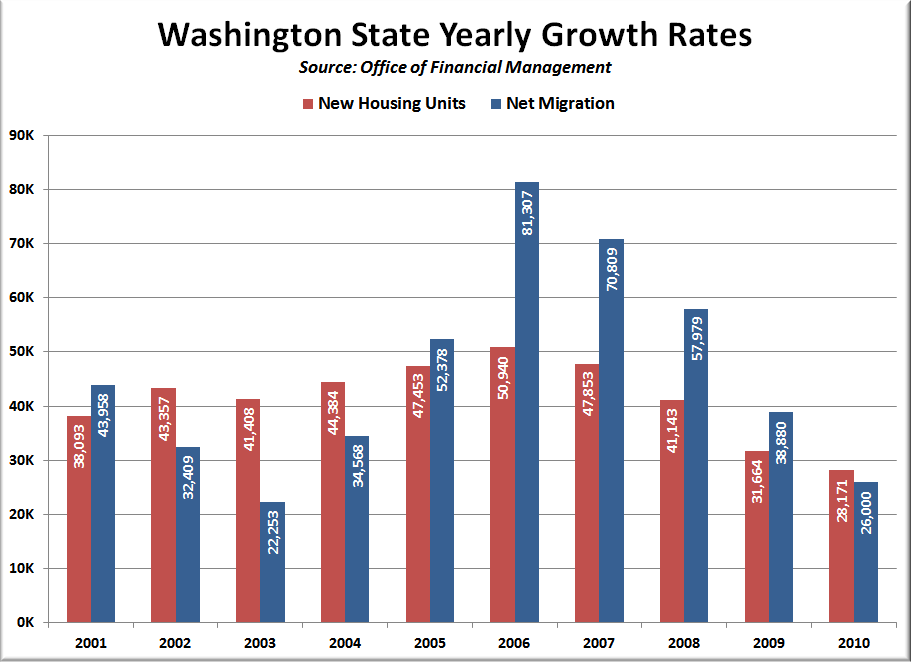 Note that most likely the net migration is about double the number of new households actually moving into the state, so unless that blue bar is twice the height of the red bar, we’re still not even absorbing the new housing inventory, let alone the standing inventory.

…when we start seeing interest rates at four percent and less, a hundred and twenty thousand people moving here… Spring will be good.

Indeed, if we truly saw as many people moving here every month as we did throughout the entirety of the last three years, there is no doubt that the real estate market would have a hot spring!

[Update]
A few commenters have pointed out that Mr. Hagar likely meant to cite a net migration of 120,000 people per year. That’s probably true, as he has been citing that figure at least since late 2007:

You would have been right not to believe the growth cited by Mr. Hagar. As you can see in the chart above, even in the peak migration year of 2006, Hagar’s 120,000 figure still overstated growth by 50%. As migration has declined by nearly 70%, he continues to claim the bogus 120,000 figure, becoming more incorrect each year.