Let’s have a look at the latest data from the Case-Shiller Home Price Index. According to October data,

Last year prices rose 0.2% from September to October and year-over-year prices were down 12.4%.

October’s data marked a new post-peak low point for Seattle home prices, which have now “rewound” to roughly February of 2005. Prices are down 2.7% since July, and down 4.3% since their late-2009 tax credit mini-peak.

As the 20-city composite index drops back into negative YOY territory, only four cities are still above where they were this time last year: Los Angeles, San Diego, San Francisco, and Washington DC. 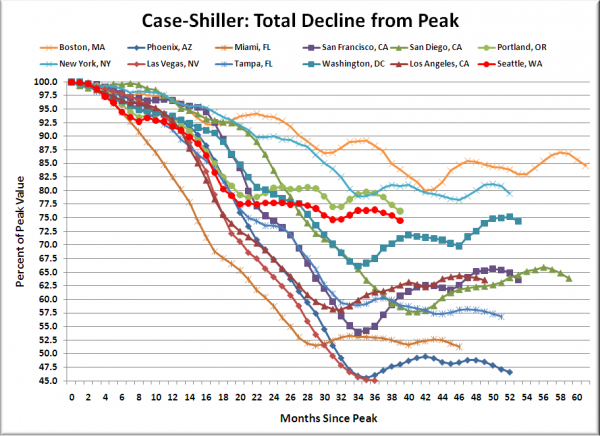 In the thirty-nine months since the price peak in Seattle prices have declined 25.6%, a new high.

For posterity, here’s our offset graph—the same graph we post every month—with L.A. & San Diego time-shifted from Seattle & Portland by 17 months. All four cities continued to fall in October. Year-over-year, Portland came in at -5.2%, Los Angeles at +3.3%, and San Diego at +3.0%.

I think this graph is still worth posting if only to display how the government’s massive intervention in the market screwed with the natural flow, causing all the markets to rise simultaneously, but in the end they are all turning back down. 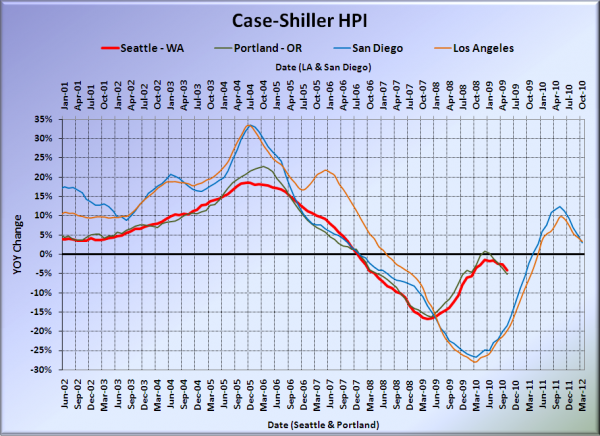