Happy Case-Shiller day, everybody. Yes, it’s time once again for us to take a look at the latest data from the Case-Shiller Home Price Index. According to December data, Seattle home prices were:

Last year prices fell 0.7% from November to December and year-over-year prices were down 7.9%.

December’s data marked yet another new post-peak low point for Seattle home prices, which have now fallen back to levels last seen in late 2004. Prices are down 5.7% since July (the first post-tax credit month), and down 7.2% since their late-2009 tax credit mini-peak.

Two more of the holdouts dropped back into YOY negative territory in December: Los Angeles and San Francisco. Now only two cities are still above where they were this time last year: San Diego and Washington DC.

In December, thirteen of the twenty Case-Shiller-tracked cities experienced smaller year-over-year drops (or saw year-over-year increases) than Seattle (one less than November): 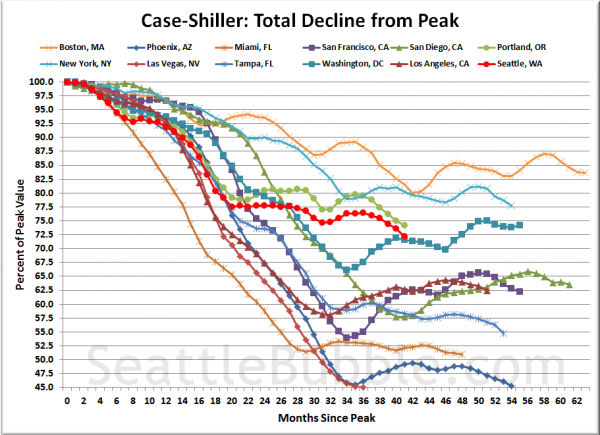 In the forty-one months since the price peak in Seattle prices have declined 27.9%, another new high.

With prices breaking backward into 2004 for the first time, I thought it might be a good time to bring back the “rewind” chart: 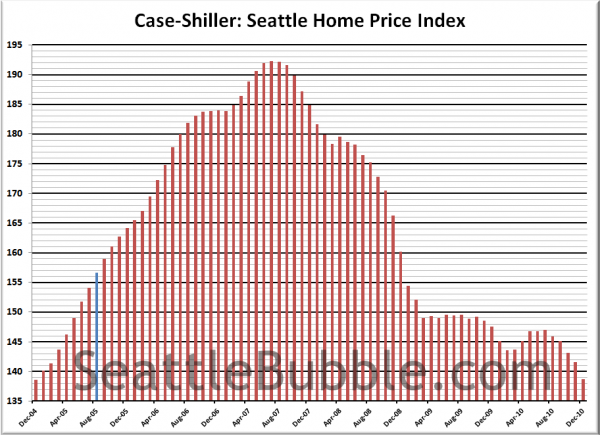 The blue line on August 2005 represents the month that this site launched. As of December 2010, there have effectively been zero price gains for six full years.

For posterity, here’s our offset graph—the same graph we post every month—with L.A. & San Diego time-shifted from Seattle & Portland by 17 months. All four cities fell yet again in December. Year-over-year, Portland came in at -7.8%, Los Angeles at -0.2%, and San Diego at +1.7%. 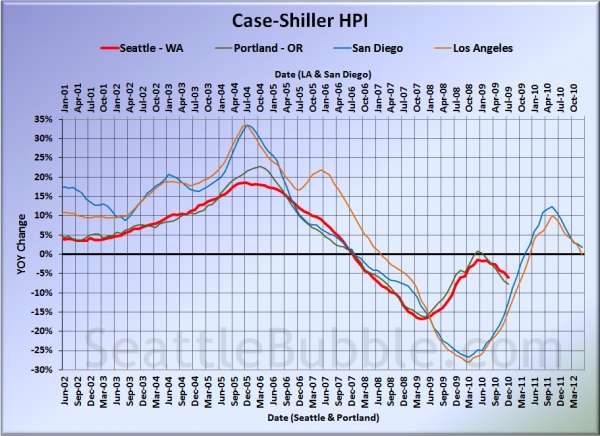