Came across this one in the Seattle Bubble archives, from March 2006 in the Tacoma News Tribune:

After several years of public investment in downtown Puyallup, private money is now pouring into multilevel condominiums around Pioneer Park.

It appears to be money well spent. Some units are expected to sell for around $500,000.

“When we started, we were not predicting prices that high,” condo developer Bill Schuur said. “It’s clear that there’s a strong housing market in downtown Puyallup.”

In recent years, Puyallup has brought pedestrians and shoppers back downtown with its new library, farmers market and businesses that have replaced empty storefronts. But some say a sure sign of downtown revitalization is when people choose to live there.

“Seattle, Bellevue, Tacoma – everybody is moving downtown,” said Tony Benson, 52, who was having early dinner with his wife, Julie, at a picnic table at Pioneer Park on a recent afternoon. “That’s the way to the future.” 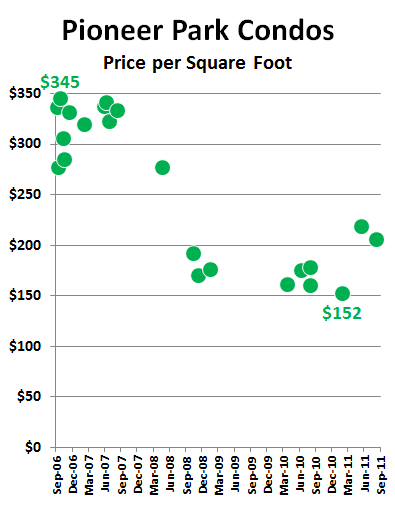 …
Developers say the demand shows no sign of abating.

“Our experience in marketing Pioneer Park Condominiums tells us, anecdotally, that demand will continue to increase, and prices will rise steadily,” Cochrane said.

At right I have embedded a chart of sales history at this particular condo complex back through late 2009. Note the 56% drop in value from the high point in 2006 to the low point to date in February. Ouch.

The top-floor corner unit penthouse in this complex—presumably the nicest unit available—sold just last month for $275,000. Not quite half a million.

Hmm. I wonder what happened to the “strong housing market” and demand that showed “no sign of abating,” and the certainty that “prices will rise steadily”?