It’s been quite a while since we checked in on the various bottom-calling methods I introduced way back in February 2009, so let’s take a look.

First off, here’s the official forecast I made in my wrap-up post:

So my personal bottom call for the Seattle real estate market, given the information available in February 2009, is December 2010 at 36% off the peak. As with my likelihood ratings on the individual forecasts, this is a totally subjective determination, assigned according to my gut feeling after working with the data. Treat it accordingly.

Note that shortly after I made this call, the homebuyer tax credit was passed, which basically put ongoing home price corrections on hold during its sixteen-month reign: 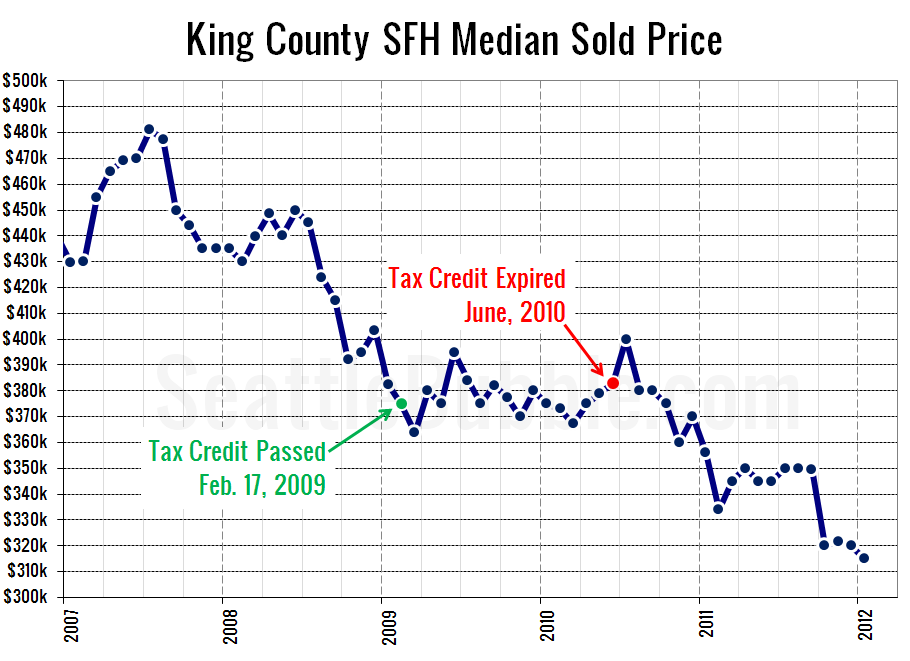 So, if we add sixteen months to my prediction to account for the distortion of the market by the tax credit, the bottom would be April 2012 at 36% off the peak. As of November’s Case-Shiller data, we were at 31% off the peak. Pretty close, but with spring right around the corner, I suspect we may actually bounce up a bit between November and April, getting further from 36% rather than closer.

That said, based on my analyses of affordability, price to rent, and price to income, I suspect that we’re basically at “the bottom” for home prices, give or take five percent—barring a complete economic collapse, of course (which I realize some of my readers still strongly believe is on the horizon).

I also just recently completed an analysis of the dozen or so major markets around the country serviced by Redfin, and published a lengthy write-up on the subject of “the bottom” there: 2012: The Beginning of a Long Bottom for Housing

Did we come here today to tell you that you need to buy a home right now because any day now prices are going to start shooting up again and if you don’t buy today you’ll pay more tomorrow? Hell no.

We’re not interested in trying to convince you that now is or is not the right time for you to buy or sell a home. We’re interested in the data…
…
We agree with Bill at Calculated Risk. For home prices around the country, on average the bottom is here.

On the way up, it took a year or two for increased supply and shrinking demand to turn into home price losses. We’re now heading into Year Two of the opposite pattern: supply is shrinking and demand is on the rise. Expect prices to hit the bottom in most markets this year (barring another complete economic collapse, of course).

Of course, the catch is that we’re likely to be here, at the bottom, for quite a while. As in, years.

Prices in the Seattle area may dip a bit more, but I’ve yet to see any compelling evidence that they’ll lose another twenty or even ten percent. Affordability is already through the roof, and interest rates are likely to be held artificially low for quite some time to come. Buyers are coming back, and supply is taking a beating. Put it all together and you’ve got a picture of a market that’s bottoming out.

So how does reality compare to those five forecast methods we published back in early 2009? Hit the jump for the full suite of graphs with the original February 2009 forecast models compared to how things have turned out so far. 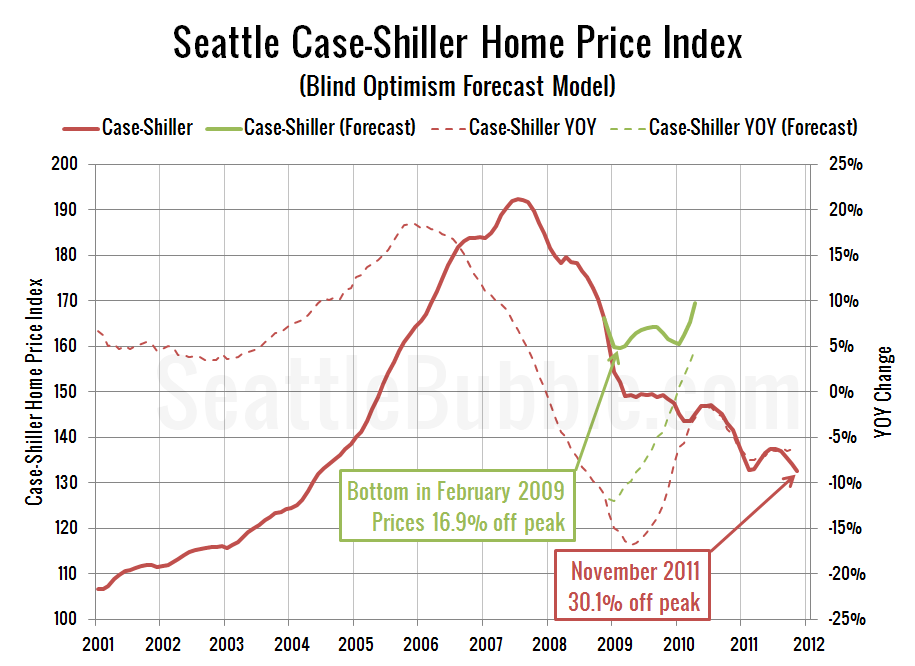 Total fail for Blind Optimism. Not even close. 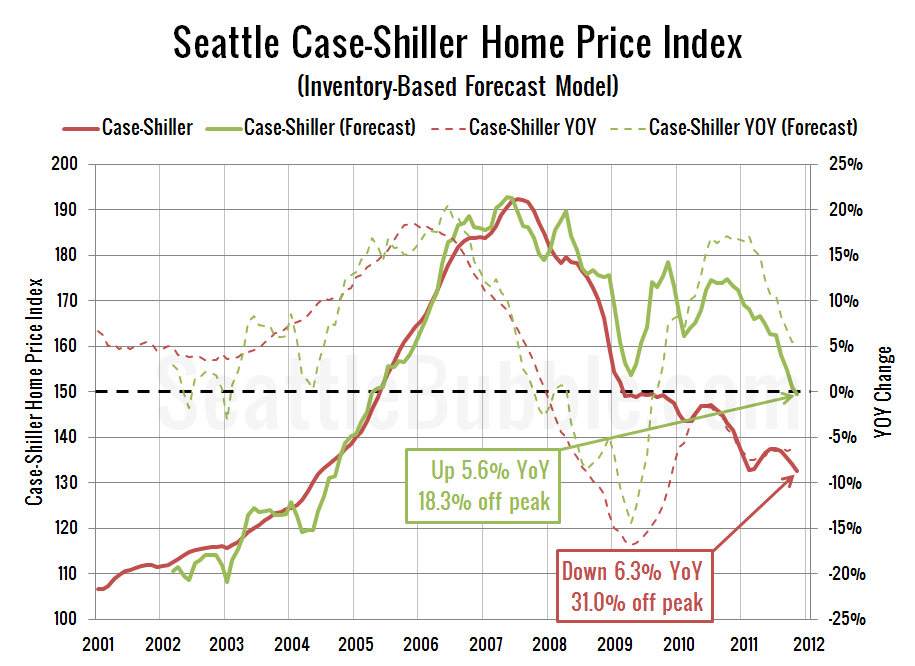 The Inventory-Based forecast fell apart pretty thoroughly just after we posted the forecast. According to this model, we “should” be at +5.6% compared to a year ago, but in reality we’re at -6.3%. 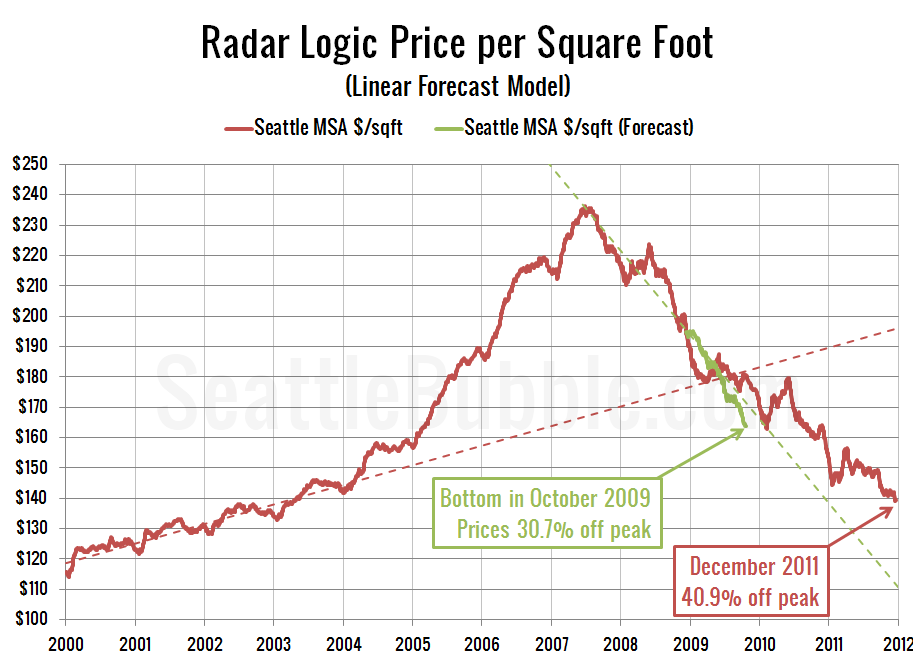 Whoops. Fail here too. Prices more or less followed the trendline down, but blasted right through 30% off peak and recently passed 40% off peak. 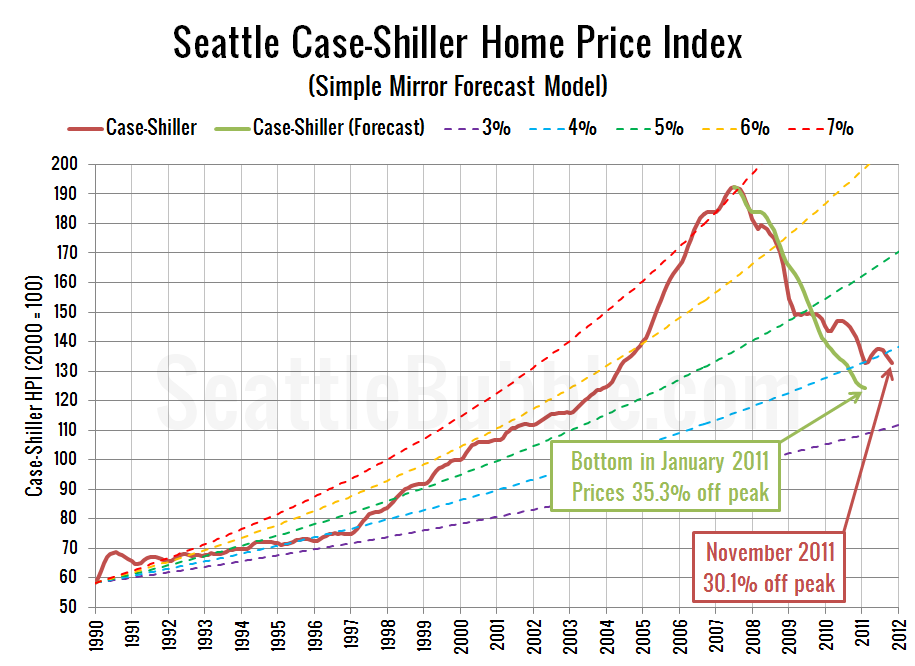 We’re actually doing slightly better than the Mirror model, at “just” 30% off peak, compared to 35% off peak a year earlier in this forecast. No doubt the tax credit had a lot to do with that. 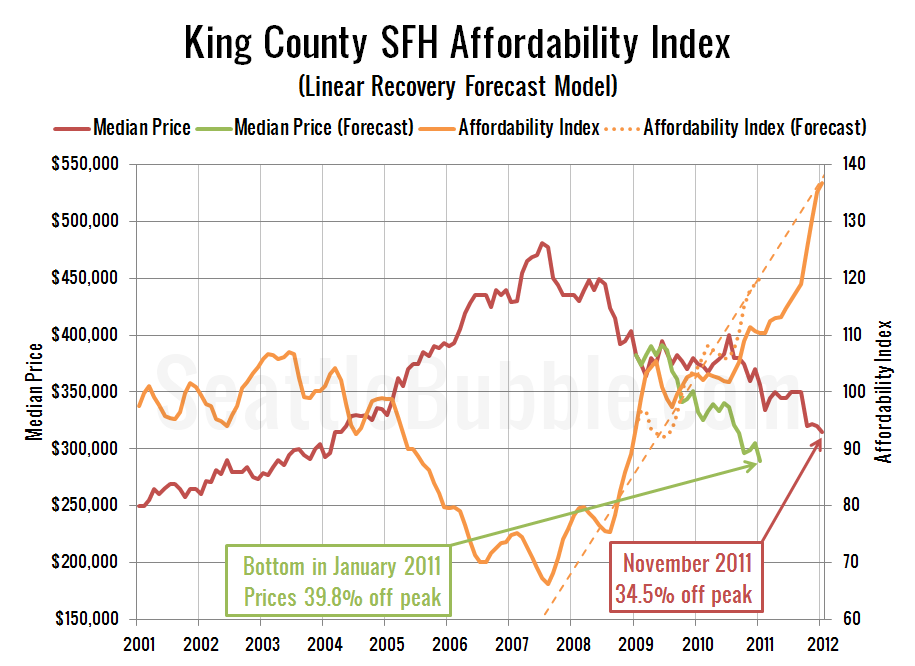 The Affordability forecast is interesting, in that home prices haven’t fallen as far or as fast as the forecast, but affordability is way higher than the forecast, thanks to the sustained plunge in interest rates. When we made this model, rates were around five percent, and the forecast was based on them staying there, not dropping to less than four percent. 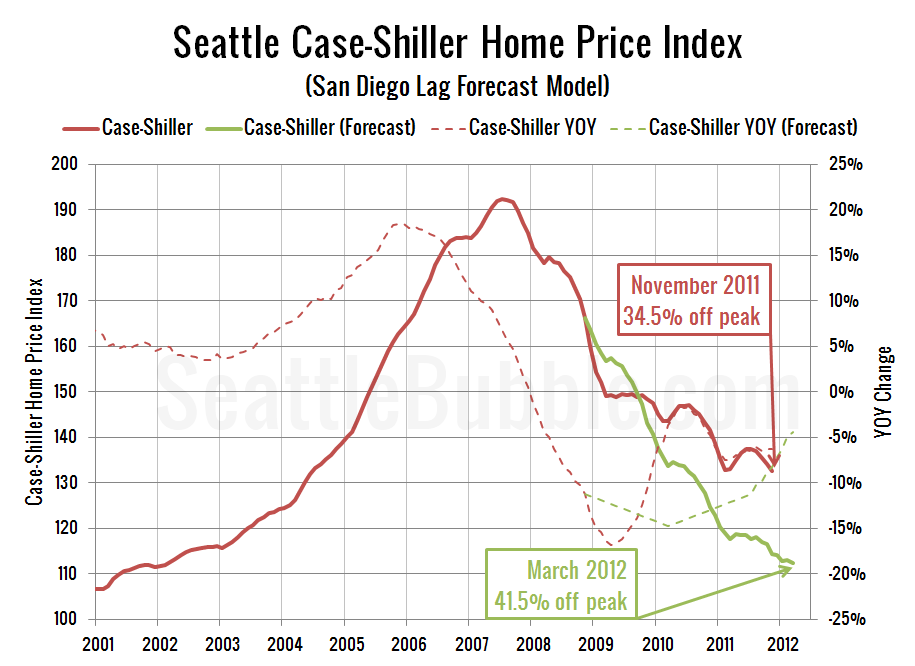 Finally, the most pessimistic forecast. As it turns out, we’re doing quite a bit better than San Diego.