Here’s a delightfully hyperbolic piece from June 2006, about a year before Seattle’s peak pricing (but eight months after sales began declining year-over-year). By this time most of the rest of the country had figured out the boom was over, but remember, Seattle was special!

Blaine Weber, half of the big-time local architecture team of Weber + Thompson (designers of Fifteen Twenty-One and other high-profile local towers) penned this delightful piece for the Seattle Daily Journal of Commerce: Are we ready for Seattle’s pivotal moment in history?

Downtown Seattle is about to undergo the most significant change since Henry Yesler built his sawmill in 1853. 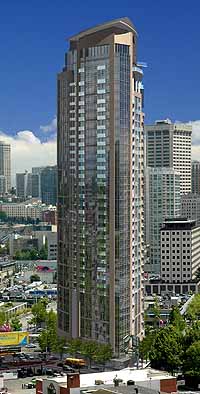 The recent adoption of a new downtown zoning code that incents taller residential towers comes as Seattle witnesses a confluence of trends and drivers that will bring thousands of residents to new high-density homes in our urban center. According to local economists, Seattle’s strong economy and job growth projections are accelerating. This will be a defining moment for the future of downtown Seattle.

Suddenly, a proliferation of new high-rise residential tower projects is on the books, in for permits, or under construction. In downtown Seattle, there are 13 projects already under construction, with another 49 proposed. If all of these projects proceed to construction, over 8,000 new residential units will be built by 2010 in the most rapid expansion of high-density development in the history of our city. It is anticipated that this number could easily grow to 10,000 new units as additional projects are queued up to meet continued demand.

The question that many are asking is: Will there be enough people moving into downtown to fill all of these towers? According to local economist Matthew Gardener, the market could readily absorb up to 2,500 new units per year. Based on a current assessment of when projects are slated for occupancy, the market will have difficulty providing this supply for the next couple of years because the typical high-rise tower takes three to four years to design and build.

Of the three projects pictured in the article—Fifteen Twenty-One, 600 Wall Street, and 1800 Terry Avenue—only one was actually built. I wonder how many of the “8,000 new residential units by 2010” really ended up materializing? I bet less than half.

Be sure to catch the rest of the articles in the entire special “Urban Development” section of the June 2006 Journal, too. Lots of great stuff in there, including an article on condo development in Tacoma that declares to the skeptics that “the doubts are unwarranted.” Well okay then.

Here’s what I had to say about this article at the time:

Maybe it’s just me, but I don’t see how forking over half a million or more for a tiny box of a home downtown is the gateway to a “lifestyle that is less stressful.” The whole article is very pie-in-the-sky, so take from it what you will.

Guess it wasn’t just me.