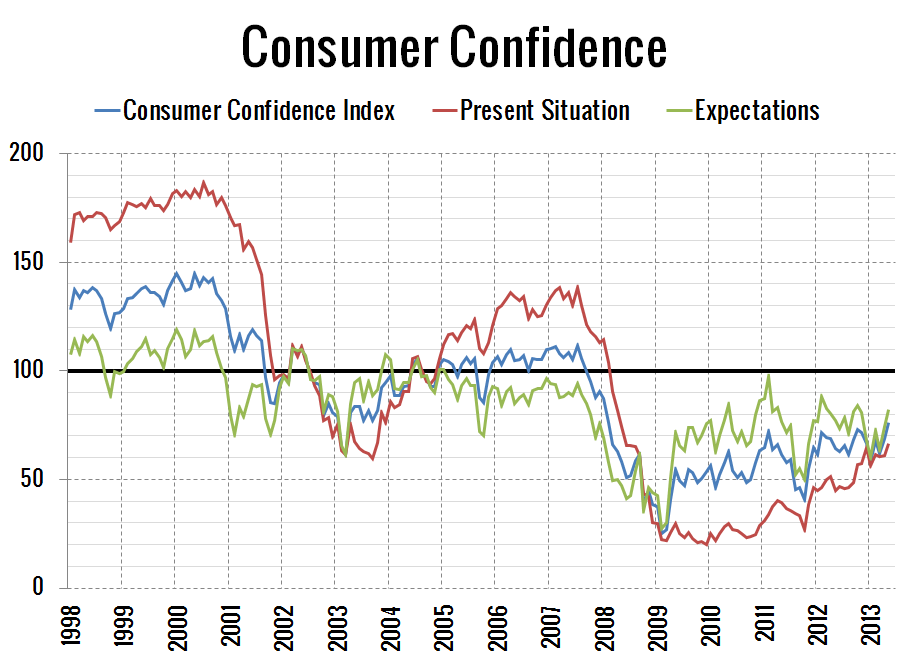 Somehow I was directed this week to a recent opinion column by the Guardian’s “US finance and economics editor” Heidi Moore: Don’t be fooled by the false economic recovery

Obviously, I love a good contrarian argument. Unfortunately, this piece is far from good.

Take the consumer confidence numbers, which are measured every month by the Conference Board and act as one of the more foolish hinges on which to hang our hopes. Consumer confidence in May jumped to 76.2, on a scale of 100.

Just three paragraphs into the article and we’ve already run into the first error. Consumer confidence is not measured “on a scale of 100.” It’s indexed to 1985 = 100. She might know that if she had bothered to look at the Conference Board’s public documentation (pdf).

In the popular interpretation, that indicates that consumers believe the economy is improving.

No, all it means when the consumer confidence index reads 76.2 is that consumers are ~24% less confident than they were in 1985. What’s important is the direction the index is moving, which is definitely up. Less than two years ago the index sat at 40.9. Is she seriously trying to argue that 76.2 is not a dramatic improvement from 40.9?

The May data shows the highest measure of consumer confidence since February 2008. That was a time in which a housing crash was already well underway, and only a month before before Bear Stearns collapsed and confirmed that the country was in a financial crisis. At least six months before that, in August 2007, three major hedge funds invested in subprime real estate had to be bailed out by the French bank BNP Paribas, and the Federal Reserve and other central banks started pumping $300bn into the global banking system. Any collective confidence back in February 2008 was foolish and unwitting of the crisis that had already started in the higher rungs of finance.

Again she completely misses the point. In February 2008, consumer confidence was plummeting, having dropped 35.5 points in just 8 months. The current rising trend is obviously good news. To imply that it isn’t is either dishonest or ignorant. Things aren’t great, but they’re getting better. 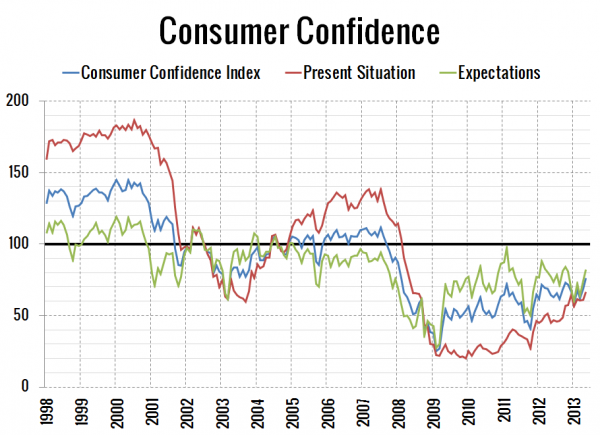 Housing prices have risen at the fastest rate in seven years, as the Case-Schiller Index of national housing prices showed today.

Apparently neither she nor her editor knows how to spell Robert Shiller’s name correctly.

The housing recovery, for instance, seems to be just another stage of the foreclosure crisis. Note that the areas where house prices have risen the most – Arizona, Las Vegas and California – are all areas that were hurt most deeply by the housing crash. So pry between the boards of the housing recovery and the termites start crawling out.

Home prices are rising fastest in these areas for a number of reasons. These places are where prices fell the furthest, overcorrecting in some cases, so it’s natural for prices to come up a bit to match local incomes. 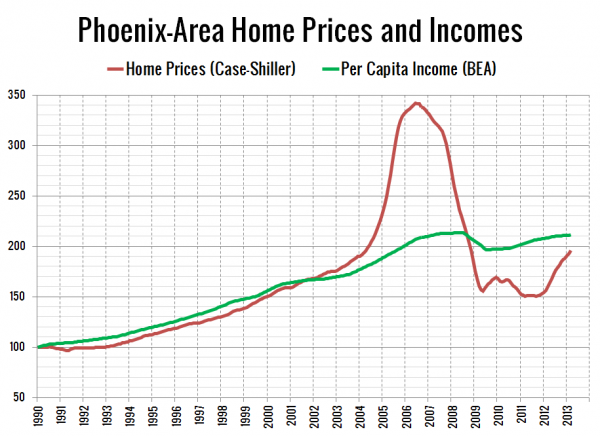 Also, foreclosures were a huge share of sales in these markets, but over the last year foreclosures have dramatically declined, so the mix of sales has shifted toward non-distressed inventory, which is naturally higher-priced.

There is evidence that lenders are controlling the housing supply by reducing the number of houses for sale. Last year, AOL Real Estate’s reporting suggested that as many as 90% of available properties were not even really on the market, but just polished for sale and being held back to keep supply low.

Then, last month, three major banks, including Citigroup and Wells Fargo, halted all their sales of homes in foreclosure; this also reduced the supply of homes on the market. The reduction in housing supply, then, is largely artificial, designed by the banks and institutions that hold thousands of houses and thus have the most to gain from higher house prices.

It couldn’t be that the number of foreclosures on the market is decreasing because the number of homes being foreclosed is decreasing, thanks to rising prices and a gradually improving economy. No, there must be a conspiracy by the banks to withhold inventory! Yeah! I’ve looked into this data and found nothing to suggest that banks are doing anything other than putting foreclosures on the market at the same rate that they’re foreclosing on homes.

A recovery allows real estate agents and banks to tell Americans that they can’t borrow money for the home they want, that they can’t participate in the housing market, while wealth private investors scoop up as much as they can.

Um, what? That doesn’t even make any sense.

Anyway, if you’ve read any contrarian arguments recently that aren’t rambling illogical messes full of basic factual errors, I’d love it if you shared them in the comments.