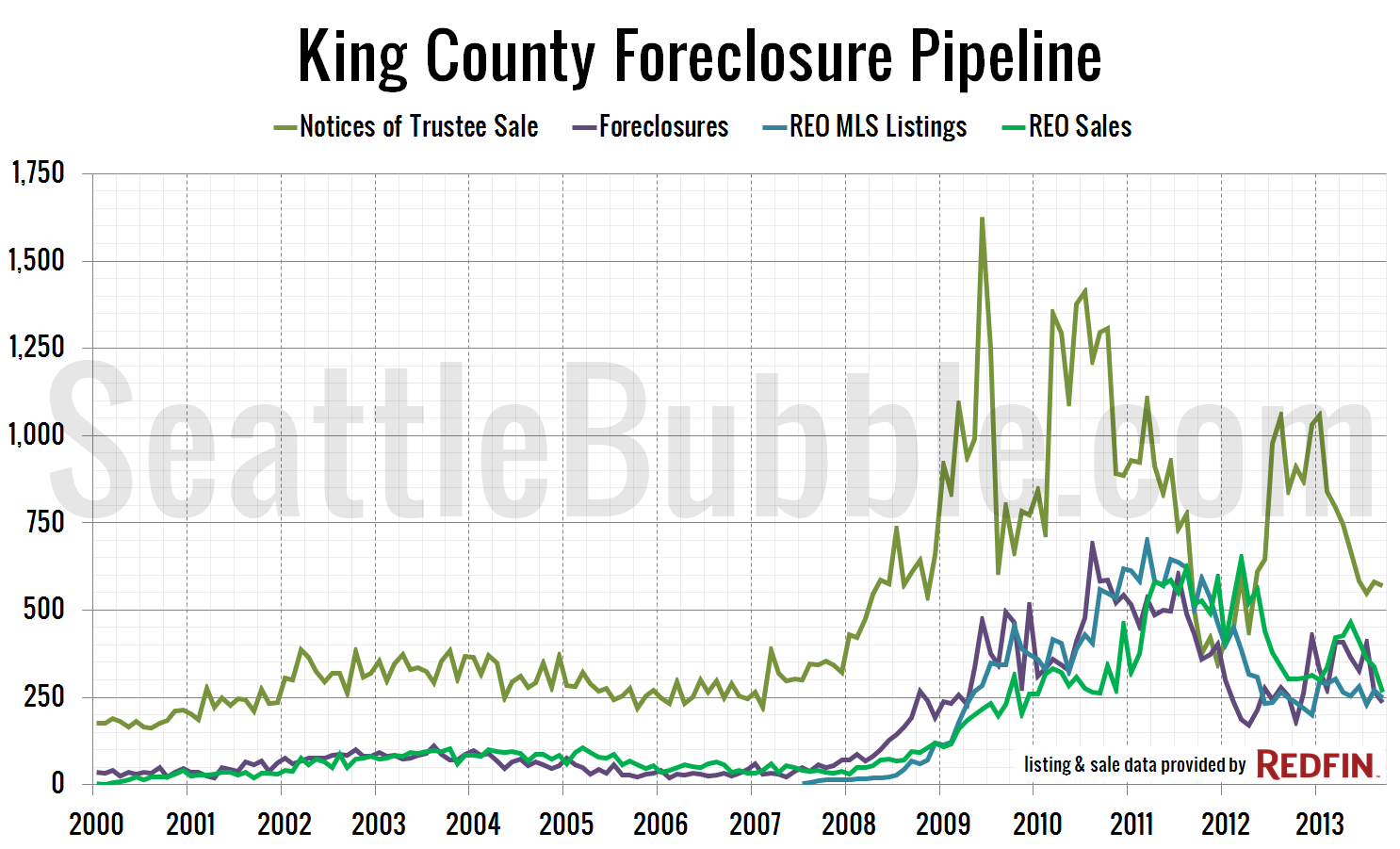 In the comments to the article I did my best to point out the misleading, sensationalist nature of the RealtyTrac “data.” A commenter going by the name of “IArustic” was not satisfied when I summarized the monthly foreclosure data I post here:

The data shows a reasonable pattern of homes moving through the foreclosure pipeline, with foreclosures peaking in mid-2009 and generally declining since then.

In response, IArustic argued that:

Your monthly posts track the notices of sale, but not the MLS foreclosure sales, that I can see. I don’t see the data for your proportional claim.
…
I’m not arguing so much as asking a data guy to show me the data.

Ideally what we would be able to do is look at how many homes hit each stage of the foreclosure pipeline (described in detail in this post) over a long period of time, rolled up by month. Unfortunately notices of default are not public record in Washington, so we can’t get that data, but thanks to my old friends at the technology-powered brokerage Redfin, I was able to get counts of actual foreclosures, MLS listings of bank-owned homes (REO), and REO sales.

Here’s what the pipeline looks like in King County since January 2000: 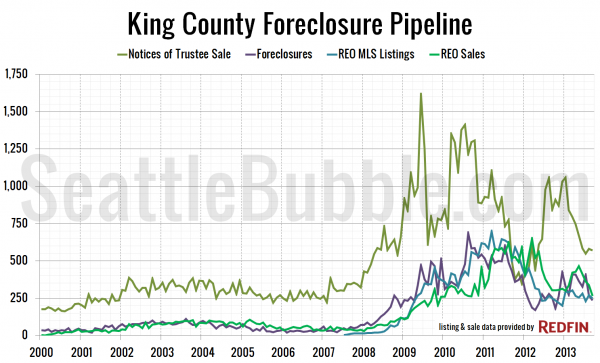 As you can see, it’s exactly what I described in the Seattle Times comment thread. Foreclosures, MLS listings of REOs, and subsequent sales of REOs have moved in direct proportion to notices of trustee sale (NTS) throughout the entirety of the data I have available.

The table at right shows a summary of the total number of foreclosures through various stages of the process during the 2000-2004 pre-bubble period and the 2007-present post-bubble period.

Only nine percent of foreclosed homes did not appear in the sale stats Redfin pulled for me during the pre-bubble period. During the post-peak period, that number decreased to just six percent.

If banks were intentionally keeping large numbers of foreclosed homes off the market, we would expect to see both of those numbers increase during the post-peak period, not decrease.

Does some amount of shadow inventory exist? Yes.

Are there some homes that are taking years to move through the foreclosure process instead of months? Yes.

Is there a massive backlog of foreclosures being “held back” by the bank, amounting to a huge shadow inventory large enough to have a large effect on the housing market? No. Not in King County, anyway.

The data shows foreclosures being processed in much the same way they always have, and a general decrease in the number of foreclosures since late 2010.

Full disclosure: The Tim is currently a Redfin shareholder.