I’ve been trying to come up with the best way of visualizing just how effective the inefficient, expensive, and economically stupid $8,000 tax credit has been at boosting home sales in the Seattle area, and I think I’ve finally come up with something really good.

To generate the chart below, I took all the single-family closed sales data that I have for King County (back through 2000) and seasonally adjusted the data to remove the predictable yearly swings. Next, I indexed each year to January = 100, and plotted them all on top of each other. Based on the trend in warranty deeds, I estimated November sales of 1,565. 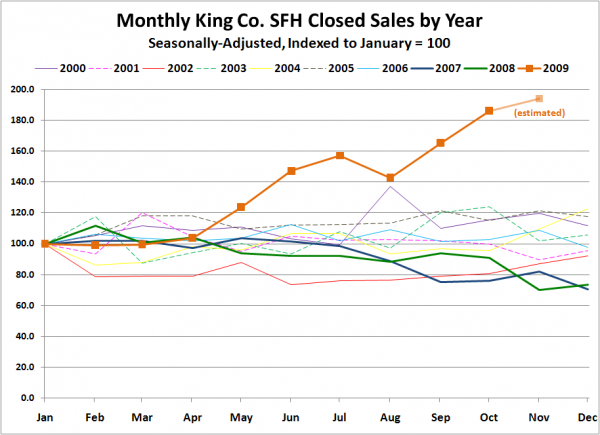 The $8,000 free money giveaway for mortgage buyers became effective in mid-February. Given a reasonable period of time (~60 days) for buyers to jump into the market, find a home, and close on it, the earliest that the tax credit would have likely had much of an effect closed sales would be around May. What do you know, May just happens to be when the 2009 series begins to diverge significantly from the other years. Huh.

In yesterday’s conversation in the comments, Kary postulated that perhaps the tax credit doesn’t deserve the credit for pushing up sales, because after all, consumer confidence has been rising through this year as well. In order to test the theory that home sales are rising primarily as a result of positive sentiment rather than government meddling, I have plotted the Consumer Confidence Index and the seasonally-adjusted closed sales series, each indexed to January 2006 = 100, which is around the time that the bubble began to slowly unwind. 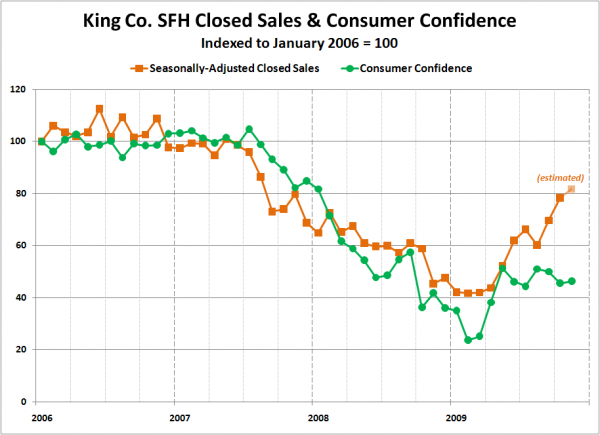 Kary’s theory that “fear” has been a large factor in the sales decline over the last few years seems to be fairly solid. However, ever since about June this year, the closed sales have been on a fairly strong upward trend, while the Consumer Confidence Index has remained more or less flat.

When the $8,000 tax credit was initially passed, I doubted that the effect would be that strong, especially here in Seattle where $8,000 represented a mere 2% of the median home price. I stupidly assumed that most people would be smart enough to realize that 2% is essentially a worthless incentive when home prices are falling at a rate of over 10% a year.

The lesson I have learned here is to never underestimate the power of free money to get people to do stupid things.