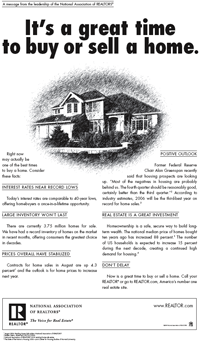 Flashback to September 2006, when the 20-city Case-Shiller index was nearly 30% higher than its latest reading. The National Association of REALTORS® launched a “Public Awareness Campaign” titled It’s a Great Time to Buy or Sell a Home. The primary flier for this campaign is pictured at right.

Here are the highlights from the flier:

Right now may actually be one of the best times to buy a home. Consider these facts:

Gosh, those talking points sound familiar, don’t they? The campaign also included another delightful PDF, ironically titled “buy_now_fact_sheet.pdf.” Here is the best part of that one:

WITH THE MARKET CORRECTION NEARING AN END, HOME PRICES ARE EXPECTED TO RISE AGAIN.

If we throw around fancy-sounding words like research enough, maybe people will believe our total BS? I mean seriously guys, Suzanne reasearched this.

In light of the current REALTOR-aided media panic blitz over today’s rising rates, I thought this portion was also pretty amusing:

The time for prospective buyers to enter the market is right now; and here’s why:

MORTGAGE INTEREST RATES ARE CLOSE TO 40-YEAR LOWS.
The average 30-year fixed rate mortgage rate remains near 40-year lows. Currently at 6.4%, this is more than an entire percentage point below 2000 levels.

You can still download the materials for this campaign directly from the NAR themselves. I was thinking that this was an amusing oversight on their part, but then I realized that their message never changes, so why wouldn’t they still want people to download the “Buy Now Fact Sheet”?