Various sources are reporting that mortgage rates have fallen to their lowest point ever this week, with the average 30-year fixed-rate loan priced at a paltry 4.69%.

Of course, you know what that means… As soon as rates start to climb a few tenths of a percentage point, we will no doubt be subjected to a barrage of scare tactic articles like the one we thoroughly mocked back in April that boldly declared “the era of record-low mortgage rates is over.”

For some context on just how low rates are, and more importantly how low they will still be even if they go up two full points, here’s a chart of mortgage rates through 1971 via the Federal Reserve. 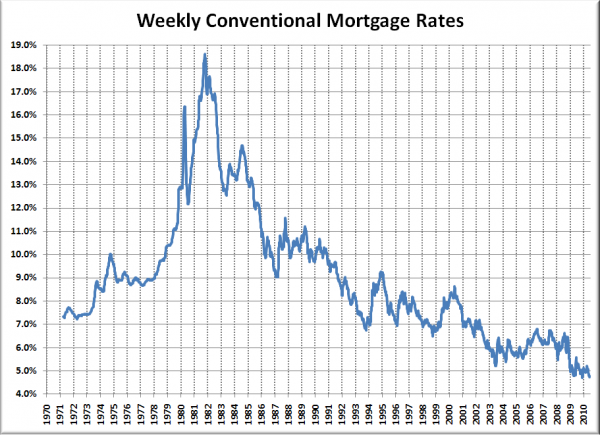 When the government got out of the business of buying mortgage-backed-securities a few months ago, everyone was thinking that the price of borrowed money would go up due to a contraction in the supply. Rates did tick up slightly for a while, but have since fallen to these new all-time lows.

Since supply is still fairly low (banks not super excited to lend), it must be a reduction in demand that is driving rates down. Incidentally, that reasoning happens to be backed up by the recent data on post-tax-credit sales (falling through the floor).

Thus, I suggest that mortgage rates are likely to remain quite low until homebuying demand begins to pick back up in earnest, which I’m betting won’t be until sometime next year at the earliest.