It’s not often we get a major national news piece focused solely on Seattle’s real estate market, but yesterday we got just that from the New York Times: Housing Crash Is Hitting Cities Thought to Be Stable

SEATTLE — Few believed the housing market here would ever collapse. Now they wonder if it will ever stop slumping.
…
In the last year, home prices in Seattle had a bigger price decline than in Las Vegas. [Case-Shiller for November: Seattle down 4.7% YOY, Las Vegas down 3.5% YOY]
…
“When I go out and talk to people around town, they say, ‘Wow, I thought we were going to have a 12 percent correction and call it a day,’ ” said Stan Humphries, chief economist for the housing site Zillow, which is based in Seattle. “But this thing just keeps on going.”

Not sure who Stan was talking to, but the vast majority of people I encountered prior to spring 2008 didn’t think Seattle was going to fall at all. Even a 10 percent drop was unthinkable to those outside of the writers and commenters on this blog.

It has been a long, painful slide. At the peak, a downturn in real estate in Seattle was nearly unthinkable. In September 2006, after prices started falling in many parts of the country but were still increasing here, The Seattle Times noted that the last time prices in the city dropped on a quarterly basis was during the severe recession of 1982.

Two local economists were quoted all but guaranteeing that Seattle was immune “if history is any indication.” A market-risk index from PMI Mortgage Insurance gave the odds of Seattle prices dropping at a negligible 11 percent.

I recall that piece well. The front page of the paper was emblazened with a giant chart of home prices going up, up, up. It was thoroughly mocked on these pages: 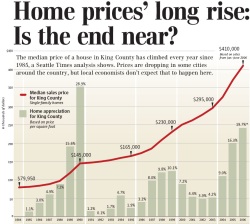 There’s not a shred of new information in this 1,265-word rant, just the same tired arguments we’ve been reading over and over again—strong local economy, not as expensive as California, etc., etc., etc… The focus of this particular article is the “it’s never gone down before” argument. I wonder if Ms. Rhodes and her lauded “local economists” have heard of the phrase “past performance is no guarantee of future results.”

But I digress. Back to the New York Times…

These days, the mood here is chastened when not downright fatalistic. If a recovery depends on a belief in better times, that seems a long way off.
…
Increasing numbers of sellers are simply surrendering.

Megan and Ryan Dortch tried to sell their one-bedroom Eastlake condo for $325,000 two years ago. They rejected an offer of $295,000 as inadequate. A year later, they relisted it for $289,000, then $279,000, which was less than they paid. Without a sale at that price, they could not afford to buy a place big enough for them and their new baby.

They have given up on real estate. They are renting out their old apartment at a small loss every month, and living in a rented house. “I don’t expect the market to get better,” said Ms. Dortch, 31, a customer service consultant.

“Better” is obviously in the eye of the beholder. In my opinion, today’s real estate market is immensely better than it was from 2005 to 2007, but for those who bought into the fantasy of easy riches through ever-increasing home prices, the last few years have definitely been sobering.

Redfin, a real estate brokerage firm based in Seattle, says foot traffic began picking up in the last several weeks. Mortgage rates are rising, which could nudge those who need to buy to make a deal now for fear rates will rise even more.

But whenever the market finally does pick up, all those accidental landlords will want to unload, putting another burden on the market. “So many sellers are waiting in the shadows,” said Redfin’s chief executive, Glenn Kelman. “The inventory is going to expand and expand and expand. I don’t see any basis for significant price increases.”

This is the same thing Glenn was saying in his Wall Street Journal editorial last week. It sounds like Glenn agrees with my theory that the pent-up supply will serve to balance out any pent-up demand that might still be lurking out there, putting a damper on price increases for the foreseeable future.

Real-estate agents, homeowners and even home buyers can tell a lot of stories to justify the bubble — stories about central cities or good school districts being immune to bubbles — but eventually people will realize that renting is a much better deal and more will do so.

There is no such thing as a market price that cannot fall.

Bingo. If only more people in super smart Seattle would have applied a modicum of critical thinking before diving head first into the market.