This article on CNNMoney caught my attention yesterday: Renew your lease – rents could rise 10%

Already, rental vacancy rates have dipped below the 10% mark, where they had been lodged for most of the past three years.

“The demand for rental housing has already started to increase,” said Peggy Alford, president of Rent.com. “Young people are starting to get rid of their roommates and move out of their parent’s basements.”

By 2012, she predicts the vacancy rate will hover at a mere 5%. And with fewer units on the market, prices will explode.

Rent hikes have averaged less than 1% a year over the past decade, according to Commerce Department statistics, adjusted for inflation. Now, Alford expects rents to spike 7% or so in each of the next two years — to a national average that will top $800 per month.

In the hottest rental markets, the increases will likely top the 10% mark annually for the next couple of years, according to Lesley Deutch of John Burns Real Estate Consulting. In San Diego, she anticipates rents will rise more than 31% by 2015. In Seattle rents will climb 29% over that period; and in Boston, they may jump between 25% and 30%.

I have often been critical of scare-mongering reports such as these in the past. This time around, with demand for rental housing increasing due to more people ditching homebuying in favor of renting and thousands of borrowers losing “their” homes to foreclosure each month, it intuitively seems like the prediction of rising rents might possibly hold a little more water.

So, let’s have a look at the data and see what the picture looks like for Seattle area rents.

In the chart below I’ve taken annual rent price index data for the Seattle area from the Bureau of Labor Statistics and plotted it against household income data for the same region from the Washington State Office of Financial Management. 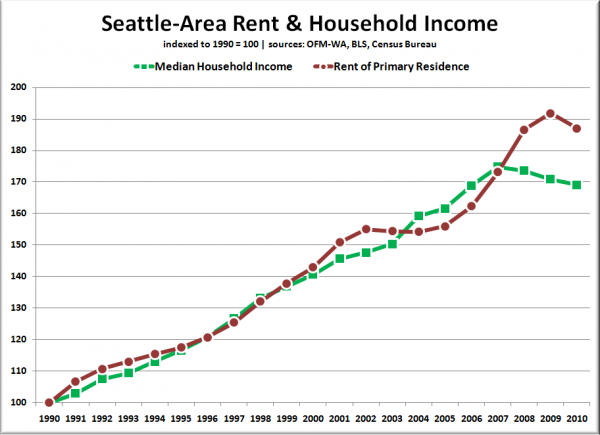 The CNNMoney article claimed that “rent hikes have averaged less than 1% a year over the past decade.” In reality, rents in the Seattle area have increased an average of 2.7% per year since 2000. Meanwhile, over the same time period incomes only increased at a rate of 1.9% per year. So, despite rental increases over the past decade of more than double the (presumably national) number stated in their article, Seattle is one of the areas predicted to have the biggest increases over the next few years—huh?

As I have pointed out numerous times before, the interesting thing about rent is that you can’t take out exotic financing to pay it, so over the long run, rents and incomes tend to track pretty darn close to each other, as can be seen from 1990 through 2003. In the aftermath of the housing bust, it seems like rents have already shot up more than local incomes would support, probably due to the factors I mentioned above.

From what I can tell by looking at the available data, rents are highly unlikely to “climb 29%” over the next four years unless we see a sudden sharp increase in incomes. If anything, rents seems poised to fall over the next few years to get back in line with incomes.

Am I missing something here?