The era of record-low mortgage rates is over.

The average rate on a 30-year loan has jumped from about 5 percent to more than 5.3 percent in just the past week. As mortgages get more expensive, more would-be homeowners are priced out of the market — a threat to the fragile recovery in the housing market.
…
“We are seeing some panic among potential buyers who have not found houses yet,” said Craig Strent, co-founder of Apex Home Loans in Bethesda, Md. “They’re saying: Man, I should have found a house three weeks ago or last month when rates are lower.”

It was funny then, and it’s even more funny now, as rates hit yet another new all-time low, a year and a half later. 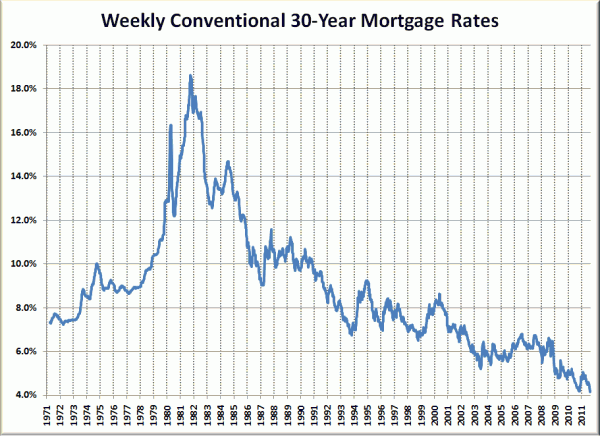 Again, notice that even when rates go up two entire percentage points, they will basically be about where they were during the hottest years of the housing bubble, when real estate salespeople were crowing about how amazing rates were, and what a great time it was to buy because of it.

Of course, at this point I wouldn’t expect rates to rise anytime soon. Demand for borrowed money is in the crapper and probably will be for a while.