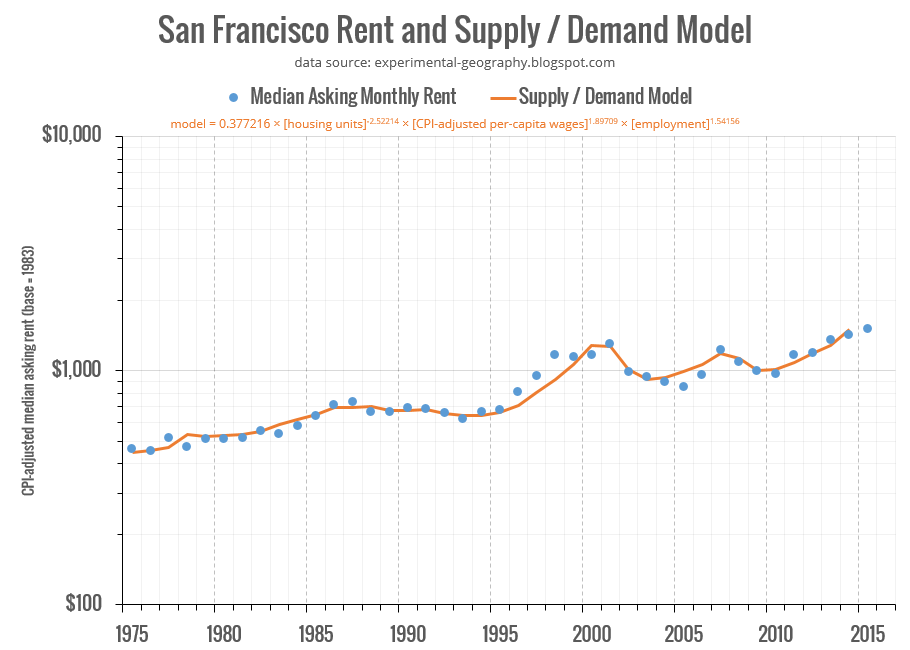 A few weeks ago Stranger writer Charles Mudede published a post in which he argued that “Seattle Is Pretty Much Game Over” in terms of housing affordability.

There was a time when something could have been done to avoid its entry into the locked cycle of asset value inflation, but that was a few years ago. We now have to face the fact that this city will become another Vancouver, B.C. or San Francisco (or Miami, for that matter). The soft city is gone for good; the hard city is here to stay.

The opinion piece is very thin on details explaining exactly why he believes this to be the case. In fact, I’ve quoted twenty percent of the entire article above. Mudede just makes a series of emotionally-framed declarations and apparently doesn’t feel any particular obligation to explain to the reader how he came to these dramatic conclusions.

Here’s the main part of the article that I’d like to focus on:

And the idea of building our way out of this bad situation, as the urbanists propose, will not produce the desired results in reality because the market is not structured in that way. It does not answer to the basic laws of supply and demand.

To put it plainly, that is complete and utter nonsense. The real estate and housing markets absolutely do answer to the laws of supply and demand. Can they occasionally be warped by other external factors? Sure, definitely. We saw an extreme example of that ten years ago during the last housing bubble, which is what motivated me to start this site. In fact, if you looked only at housing prices as Mudede does in his piece you would have come to a similar conclusion that we were stuck in a “locked cycle of asset value inflation” in 2007 as well.

But prices alone do not paint a complete portrait of the real estate market. Despite Mudede’s unfounded assertion to the contrary, the housing market does respond to supply and demand. And it’s funny that he should mention San Francisco, because just a few days ago a gentleman named Eric Fischer published a great piece exploring an investigation of nearly 70 years of San Francisco rental price data.

Housing, it appears, gets expensive either when people get paid more or there are more people getting paid, and more steeply than simple linear increase. … If you add [housing inventory] to the model, it does a better job of explaining the swings in rent over the past 20 years through the additional prediction that housing gets cheaper than employment alone would predict when you build more of it, and doesn’t when you don’t.

Using housing inventory (supply) plus wages and total employment (demand) he was able to build a very good model that predicts housing prices for San Francisco: 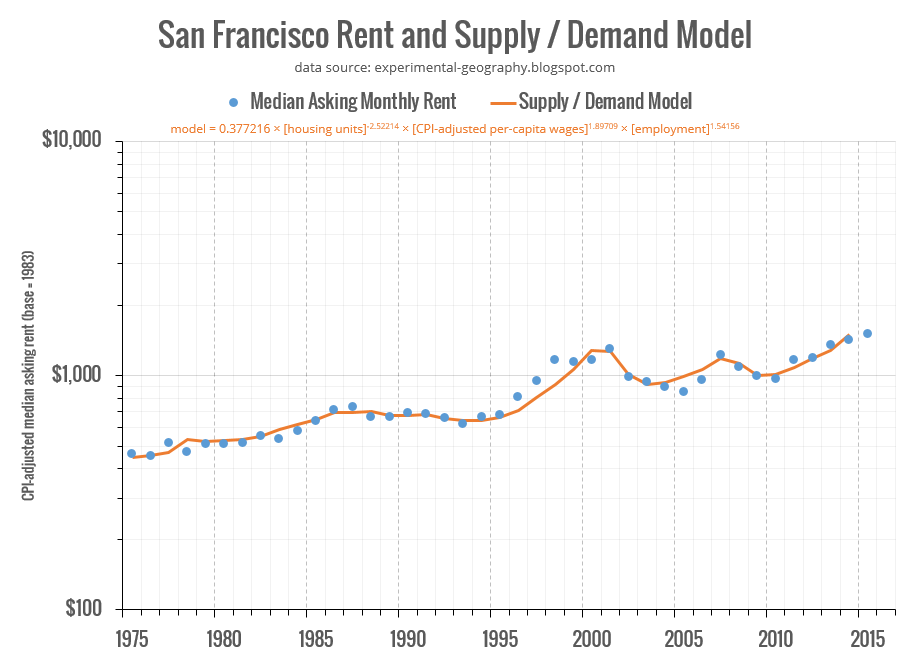 In other words, housing does “answer to the basic laws of supply and demand.” Even in San Francisco, where a 390-square-foot apartment currently rents for $3,200 (link). The source of the problem of high housing prices is simple: Demand (employment and wages) is increasing faster than supply (new housing inventory).

San Francisco does not have enough places to live. Sonja Trauss, a local activist, thinks the city should tackle this problem by building more housing.

This may not sound like a controversial idea. But this is San Francisco.
…
Across the country, a reversal in urban flight has ignited debates over gentrification, wealth, generational change and the definition of the modern city. It’s a familiar battle in suburbs, where not-in-my-backyard homeowners are an American archetype.

In San Francisco, though, things get weird. Here the tech boom is clashing with tough development laws and resentment from established residents who want to choke off growth to prevent further change.
…
Those groups oppose almost every new development except those reserved for subsidized affordable housing.

San Francisco is an expensive city because it is an affluent city with a growing population and no easily available land for development. Sonja Trauss is right that building more housing would reduce rents of both high- and low-end apartments. Tim Redmond is right that building enough housing to make much of a dent in prices would change the visual character of most streets, although the result could be more like Barcelona than like the Hong Kong that he fears. The unsettled question is which of these is the higher priority.

Building enough housing to roll back prices to the “good old days” is probably not realistic, because the necessary construction rates were never achieved even when planning and zoning were considerably less restrictive than they are now. Building enough to compensate for the growing economy is a somewhat more realistic goal and would keep things from getting worse.

…if price stability is the goal, the city and its citizens should try to increase the housing supply by an average of 1.5% per year (which is about 3.75 times the general rate since 1975, and with the current inventory would mean 5700 units per year).

Similarly here in Seattle, building more housing would help prevent it from becoming even more expensive. That said, even if we dramatically relaxed regulations and ramped up incentives for development, we’re not likely to see builders add new housing at a rate that would be required to begin driving prices down. Builders want to make a profit, after all. However, with enough new housing we could absolutely level off price increases and allow employment and wages to catch back up. There is zero reason to believe that’s not possible.

Of course, this all assumes that the economy—and specifically the tech economy—is not currently in another big bubble. If it is, and if said bubble pops, expect housing prices to drop again, regardless of how special Seattle may seem right now.