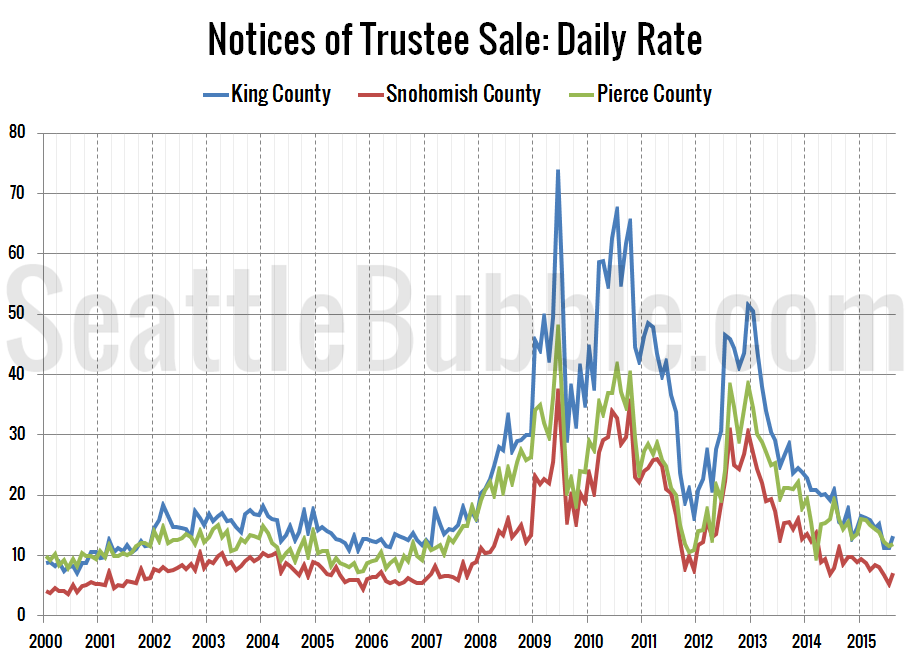 It’s been a few months since we took a detailed look at foreclosure stats in King, Snohomish, and Pierce counties, so let’s update those numbers. First up, the Notice of Trustee Sale summary:

The number of trustee sale notices is still falling year-over-year. Aside from the oddities in the data brought on by various state legislation that modifies the foreclosure process, foreclosure notices in all three counties have been on a relatively steady retreat since peaking in mid-2009.

Here’s the chart of foreclosures per business day. All three counties are down year-over-year by that metric as well, but month-over-month notices increased in all three counties.

My January prediction that “2015 seems likely to be the year foreclosure levels return to their pre-bust levels” seems to be true.

The percentage of households in the chart above is determined using OFM population estimates and household sizes from the 2000 Census. King County came in at 1 NTS per 3,012 households, Snohomish County had 1 NTS per 1,881 households, and Pierce had 1 NTS for every 1,274 households (higher numbers means fewer foreclosures).

According to foreclosure tracking company RealtyTrac, Washington’s statewide foreclosure rate for August was one foreclosure for every 1,354 housing units. Note that RealtyTrac’s definition of “in foreclosure” is much broader than what we are using, and includes Notice of Default, Lis Pendens, Notice of Trustee Sale, and Bank-Owned.