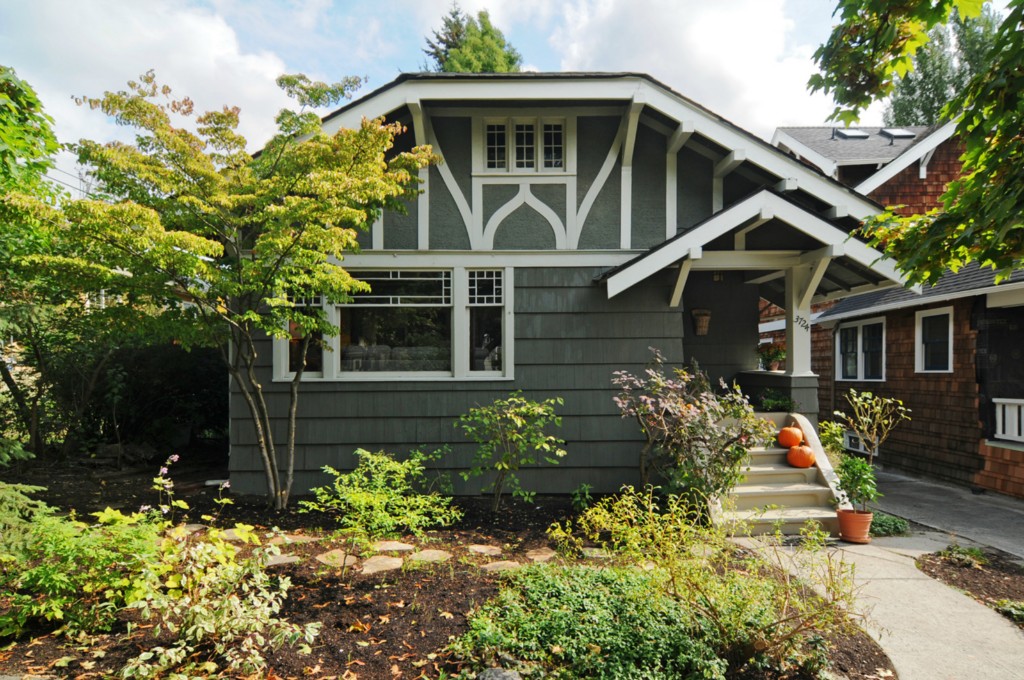 It’s been far too long since our last game of “Guess the Price,” so let’s kick off a new round. Here’s how the game works. I’ll describe a home that’s currently on the market, giving you as many pros and cons as I can, and you guess what the final sale price will be when/if it sells.

Be sure to enter your real email address into the form when you leave your guess in the comments, because the winner gets a $25 gift card to the restaurant chain of their choosing. Don’t worry, I’m the only one that can see the emails that are entered. The winner is the person whose guess is closest to the final sale price, above or below. If there is a tie, whoever guessed closer to the correct closing date will be declared the winner.

Contest closes to entries at midnight the morning of October 10th, or when the home goes pending, whichever comes first. Note that some past rounds have gone pending in just a few days or even hours after the contest opened, so get your guess in early! 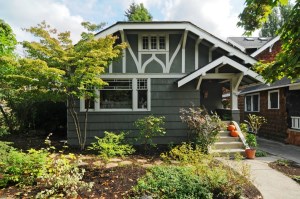 This round’s home hit the market on Tuesday with an asking price of $599,950. It last sold 18 years ago in January 1996 for $171,000, so today’s asking price represents average annual appreciation of around seven percent. For reference, the Case-Shiller index for Seattle has gained roughly 4.75 percent per year over the same period, a rate that would put the current value of this home at around $400,000.

Our home this month is not bank-owned, a short sale, or a flip. It sits in Wallingford, where the median price of single-family homes sold in August was $682,000. Here’s the listing agent’s description: 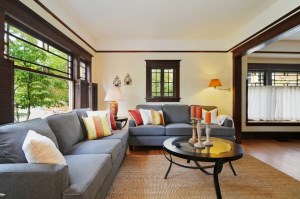 Built in 1909, this 1-story home (with basement) sports 2 bedrooms and one full bathroom. All of the finished space is on the main floor, while the basement is unfinished and contains just the washer/dryer and lots of wide open storage space. [Update: According to a Redfin agent insight, the basement is “only accessible from exterior of home.” The Redfin agent also noted “updated copper plumbing and electrical.”]

According to the King County Department of Assessments, 990 of the home’s square feet are above ground, with an additional 990 in the basement. Note that the MLS listing is displaying the square footage as 1,980, which includes the entirety of the unfinished (and from the looks of the photos, short) basement. This misleading information is built by design into the NWMLS system. 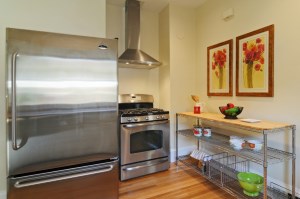 Inside, the home looks to be very nice condition. If the windows in the living room and dining room are not original to the home, they are well-crafted to fit in with the original style. In the main living areas the wood trim is all unpainted and looks very nice. From the photos, the hardwood floors look to be in good condition as well.

The kitchen looks like it has plenty of counter space as well as a decent amount of cabinet space. The appliances all look to be relatively new and of decent quality. The countertops do not appear to be any of the currently trendy materials, but they do seem to be in good shape.

The biggest problem with the kitchen is the layout. The sink and most of the counter space is on the opposite side of the room from the refrigerator and the oven, which is oddly placed in a recessed corner of the room with no immediately adjacent counters. 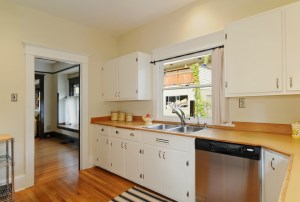 Off the back of the home there is a small yard as well as a modest deck. A large tree takes up a good amount of space right in the middle of the yard. Due to the home’s location on the block and the layout of the surrounding lots, this home has five immediate neighbors, four of whom have back yards that look right into this home’s back yard.

The exterior of the home appears to be just as well-kept-up as the interior. From the photos the paint looks relatively new. The small front yard looks well-landscaped. Unfortunately, while the listing indicates that the home includes off-street parking, that parking appears to take the form of uncovered space on a driveway whose street access is shared with the neighbor to the south. The garage that can be seen on the right side of photo #21 in the listing appears to belong to the neighbor.

There is an open house scheduled for this Sunday from 1:00 PM to 4:00 PM, so if you’d like to see the home in person or judge the “open house foot traffic” before you place your guess, there’s your chance.

Overall, both the house and the location seem very nice. The current list price feels a bit high to me, but at least one similar home nearby sold for $690,000 just a few months ago, so it’s not outside the realm of possibility.

So, what say you? How much will this home sell for, and when will it sell?